As you know, I'm a fan of The Muppets. 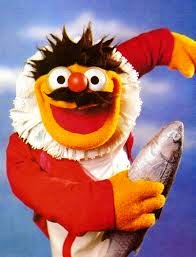 And it was while doing an article on my Top Eleven Muppet Moments that I realized how much I enjoy the film Follow That Bird. 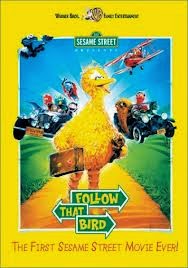 Buy it and play along at home!

Before we begin, some background. Sesame Street came about thanks to the work of The Children's Television Workshop, who developed the series as a way to help young children prepare for school. Jim Henson was approached to develop characters for the series based on his success in commercials and with Rowlf the Dog on the Jimmy Dean Show.

Yes, Rowlf the Dog was the OG.
And the sausage guy had a variety show.

In November, 1969, Sesame Street hit the airwaves and went over like gangbusters. People loved the show, loved the Muppets, and the rest was history! And then the 80s came along. And someone was like "Hey, let's make a movie!" 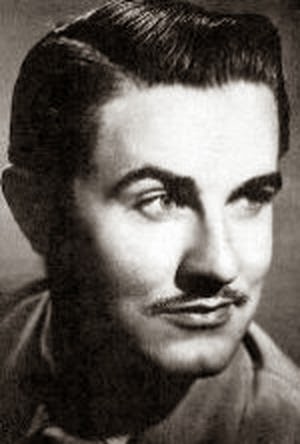 It wasn't actually Ed Wood.
But how awesome if it had been?

This flick opens up with Oscar the Grouch against an American Flag. 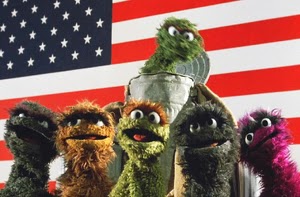 I'd just like to point out, this movie not only opens with a Patton reference, but Oscar leads in the Grouch National Anthem. Suffice it to say, we are in for a wild ride. We then cut to a board room, where a bunch of giant birds called "The Feathered Friends" are gathered. They look out for orphaned birds. Their next target is Big Bird, who they believe is being neglected and needs a real family. 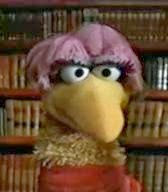 Today's episode is brought to you by the letters D S & S!

We then get to see Big Bird being "neglected" on Sesame Street, and can I just say, this movie has the greatest transition ever? The Finch up there asks "Yes, but can you tell me HOW to get to Sesame Street?" And all of a sudden I'm just like "SUNNY DAYS!!!!"

So, Finch comes in and convinces Big Bird that he needs to be taken from his home and sent off to live with his own kind. For the record, this movie was in 1985. PRESCIENCE! Big Bird says goodbye to the people, and for me the hardest of the goodbyes is between BB and Mr. Snuffleupagus. 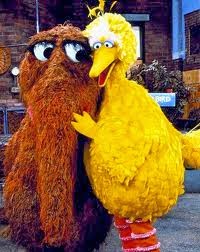 I'll let you guess which one is which.

I actually remember this time as being when no one actually believed Mr. Snuffleupagus was real, and accused Big Bird of lying. Which, when you're a creative kid that can really hurt. And the idea of having to say goodbye to your best friend, that hurts too. And then Big Bird meets his new family, The Dodos.

Words do not do justice to my hate!

BB eventually gets sick of living with The Dodos, especially when they tell him Mr. Snuffleupagus can't come and visit. Because he's only allowed to spend time with other birds. Because HOLY CRAP THIS MOVIE IS ABOUT RACISM! 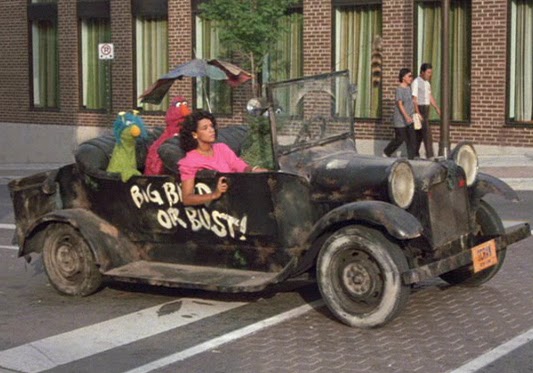 Bird runs away, and the Sesame Street gang realizes they have to find BB before The Finch gets him. There's maps, cars and exposition involved. The point is, Big Bird is crossing America because he doesn't understand how distance works. And the gang is coming to rescue him because they understand how mass market appeal works. 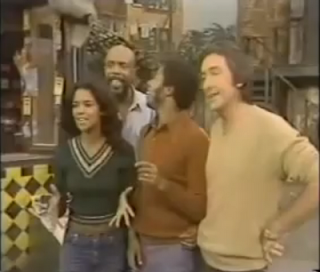 Even as a child I understood: Maria brings the hotness

While this is going on, Big Bird stumbles across various people. Some are good, like Waylon Jennings. And, can I just say: Someone made a road movie where Waylon Jennings duets with an eight foot tall canary. 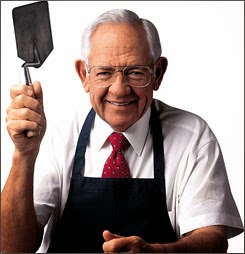 Pictured: Not a Canadian Comedy Legend

Joe and Dave are evil carnies who take pride in scamming children. That, that's not an exaggeration. There is literally a scene where these bozos scam a kid. It's awesome! In order to make some money, the Two Evil Canadians (dibs on the band name) kidnap Big Bird, paint him blue, and charge admission to see him sing.

Their exact plan was:
1) Kidnap Big Bird
2) Paint him blue
3) Profit?
This proves to be literally just the absolute worst piece of entertainment EVER. Also, how no one has ever re-edited this movie to Birdhouse In Your Soul is beyond me. Thankfully, the Sesame Street gang come to Big Bird's rescue. Now, here's where I have to take a step back and question this film. 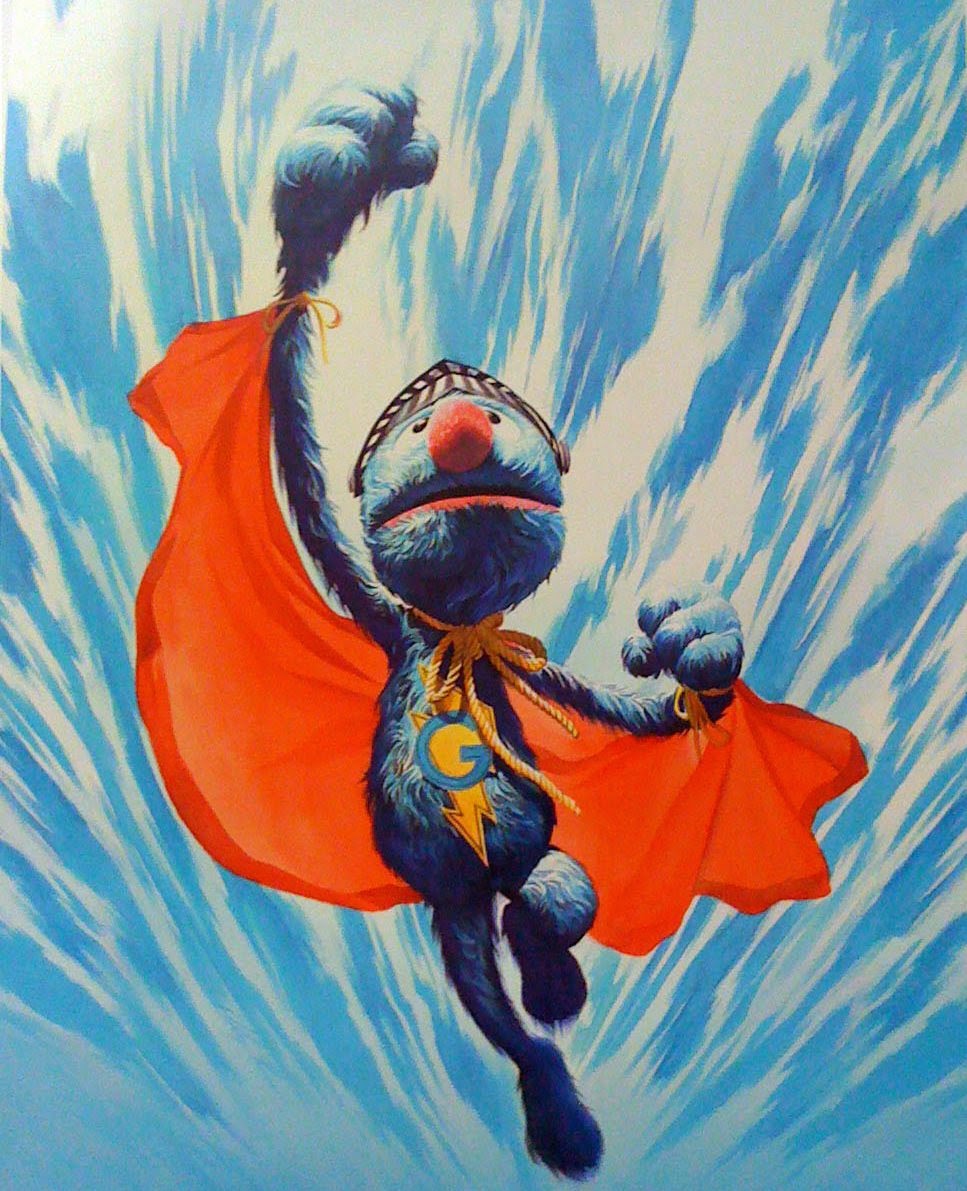 I can follow you as far as SUPER GROVER...

See, Big Bird is locked in a cage, and the sleeping Joe Flaherty has the key. And the gang has to find a way to sneak the key away. And, what I question is: There's like six of you! Including a vampire, a cookie monster, and Super Grover. Dude, I'm mildly asthmatic and even I could have taken 1985 Joe Flaherty! Just sprinkle some cookies on him and let nature take it's course! 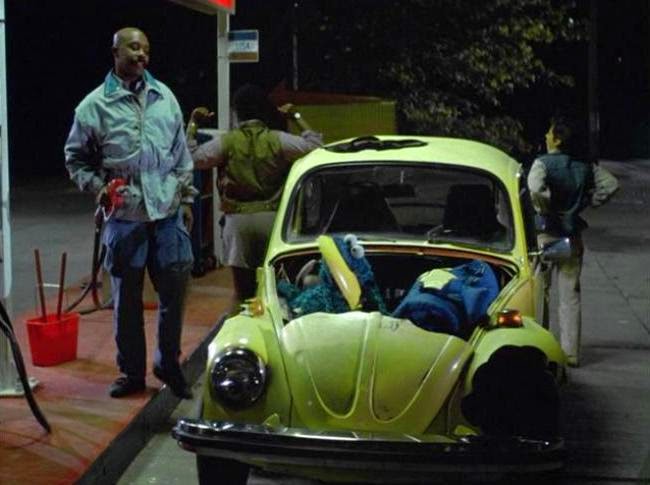 Oh sure! He can eat a German feat of engineering!
But a C-List Actor is just too far!

Well, of course they rescue Big Bird. And the bad guys even get their comeuppance when they are arrested by John Candy. 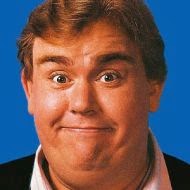 BB returns to Sesame Street, only to find The Finch waiting for him. She's ready to send him to a new home, when the gang stands up to her. They point out, Big Bird has a perfectly fine family right here. And that's when it hits you: Family isn't just who looks like you. It's who loves you, and you love in return. Family can come in all shapes and sizes, and will always be there for you, no matter what. And if you start to get a little misty-eyed at this point, it's OK, blame it on ninjas cutting onions. 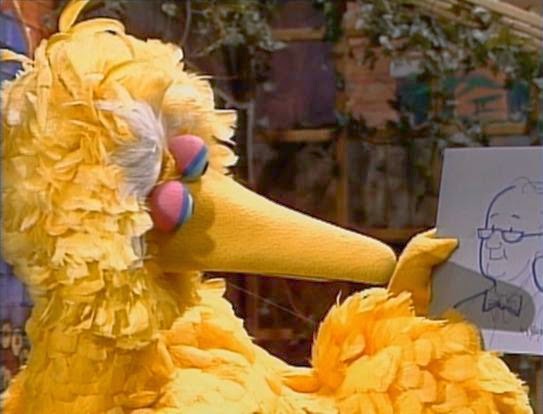 Works for me everytime!

Thanks for playing along, and I really hope you'll check out Follow That Bird sometime. Until next time, keep it Mimsey!


Jay Mims writes books, blogs, and is very grateful for his Nakama. Jay and The Mimsus live with a passive-aggressive Dalek named Steve, and have semi-adopted their neighbor's cat named Eartha Kitty. There's another cat named Meowlificient, but he's not as interesting. Also a Lizard that Jay calls Bob. Jay is far funnier on Facebook then in real life. He is terrible at Twitter.