You may remember Jacinta Maree as a friend of the blog and an all-around awesome author. Last time she visited, she inspired Dan Landis to give Ten Tips For Being A Better You

You can find the full blog tour schedule here!
In the meantime, why don't you join me in giving Jacinta a big Mimsey-welcome as she shares with us a blurb from the book, a bit more about herself and where we can own our very own Demonic Ghost. 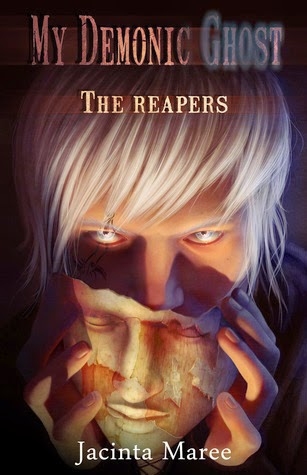 Synopsis:
The day you die is meant to be the end, but for 18 year old Jordon Hastings, his death was only the beginning.

In a dark and twisted world, lost spirits known as Reapers remain behind after death to help collect the spirits from the realm of the living. A new Reaper, Jordon struggles to accept his fate and lingers in the shadows of his mortal life. But when a demon wolf starts to live through his shadow, hunting his family and friends Jordon has no choice but to leave. As soon as he accepts his new role the truth behind the relationship between Reapers and Angelic Hunters is revealed. His loyalty is tested, making him choose between a corrupted God and a single Banished Spirit.

Hours later, maybe days, maybe more, a soft rumbling could be heard at my left, trying to catch my attention. I finally let a crack of light in under my eyelids, but it was like a bare flame, making me slam my eyes shut and resume sleeping.

When I finally did open my eyes again, I was in a strange room looking up at an unfamiliar roof. I was on a bed, unrestrained this time, and the room was left in silent stillness. Raix was next to my side, grunting about something. As bitter as I was, I couldn’t remain mad at him. I reached up and gingerly dabbed my fingertips along my face, trying to feel for wounds. My skin was numb but otherwise unscratched.

When I got to the mirror to check my reflection, I looked the same except for the ash blond hair and silver eyes. Unlike before, when I would transform to this Reaper state, this now seemed to be my only face. I pulled at my skin, trying to see if there was a mask deceiving me before I grabbed my phone and took a picture with it. Upon flipping it over, the image returned to me wasn’t what I was expecting. The face was neutral; forgettable, plain, and smudged.

I stared at it for ages, but couldn’t pick up a single detail that stood out. Even a second after
looking at the photo and pulling the phone away, I instantly forgot everything about the boy. It was a generic face. A face that belonged to nobody yet it could belong to anybody.

I sat myself back down, head bent between my knees, trying to catch my breath before I
panicked. He had done it. Raix had stolen my face, taken my identity from me. No, it wasn’t
Raix, it was Christophe. The Reapers. Raix acted on command, it was nothing more than that.

“I’m glad to see you’re awake.” Elliot walked in from the other room. He glanced at me briefly before turning his focus to the orange he’d been tending to. He was peeling the skin back, letting the rind drop in pieces to the floor. “I should’ve warned you.”

I sat up quickly. “You knew they were going to do this to me?”

“They had to eventually. I didn’t know when, though. You can stay here with me until you find your own place. It won’t be easy; no identity means you can’t really interact with people anymore. Definitely no paying job, so money is scarce. A lot of us steal, just enough to get by.”

“But…what about my family?”

“You don’t get a family anymore. You’re a Reaper, Jordon. We don’t get families or holidays or happily ever after. We work until we can’t work anymore and then…”

Elliot inhaled deeply, motioning for me to follow him out of the bedroom and into the kitchen. Elliot was taller than me as we stood facing the open window; the busy life in the streets down below made barely a whisper inside his home. The apartment was bare. No pictures. No personal items. Not even rubbish or groceries to prove that anyone lived here. I stood next to Elliot on weak knees, still feeling the pain of Raix’s attack as though it was a lingering headache. I didn’t think I would ever be able to forget it.

“Do you know what happened to Raix’s last Reaper?” Elliot asked as he kept his face turned to the window. The light was leaking through in soft white strokes, brightening his ash blonde hair and setting his eyes aglow like illuminated night bugs. Staring at his profile, I shook my head no.

He continued, “Raix’s last owner was called Angela, a woman in her thirties. Beyond that, I never knew anything about her. She worked as the rest of us worked, alone. Through Christophe, I heard Angela was sent on a job to collect the soul of a young man called Thomas. It was just bad luck that the boy was her first-born son, dying from a drunk driving accident. He’d rammed into a pole, torn through the gas tank, and it was leaking fuel at an alarming rate. It was only a matter of time before the car exploded. He had a foul smell, like that shadow ghost, so she knew he was destined to be Banished. Unable to bring her son in, Angela instead dragged him from the wreckage and saved his life. Hunters found out of course, and as punishment they forced Raix to destroy her.”

I gulped, feeling a knot wedge in my throat.

“Goons aren’t meant to destroy their Reapers. It’s unnatural. I never witnessed a Goon withdraw into a depression like he did. It almost got so bad that the other Reapers didn’t know what to do with him. A loose Goon is like a wild, rabid animal, with no control and no regard for protocol. On the night he was going to be destroyed, I was sent to fetch him and bring him in to the Hunters. But then, Raix found you. Dying from head trauma. And just like that, life was kicked back into the over-large wolf’s body. Even though your existence to him is the line between life and death, if commanded a Goon will destroy its Reaper. You mean the world to him…but that doesn’t mean he won’t eliminate you.”

And hey, did you know Amazon is now making it even easier to spend money? You can now shop Amazon directly from Twitter. Click the link to find out how, and don't forget to pick up Jacinta Maree's latest The Reapers

Shop Amazon - #AmazonCart - Add to Your Cart Directly From Twitter