What makes a Princess tick? Examining the motivation of 13 Disney Princesses...

I have truly awesome friends. One of those friends, A.R. Campbell, was talking about how annoying it was that people were claiming Frozen featured the first princess not motivated by a man. Running with this like I was the Hamburglar, I thought I would share with you my take on what motivates a princess. 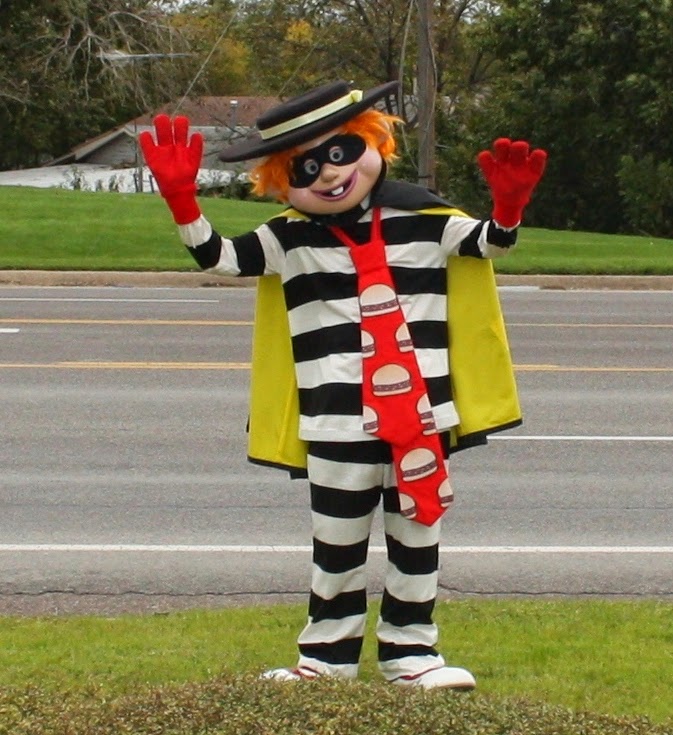 This is what I wear while doing so...


What makes a Princess tick? Examining the motivation of 13 Disney Princesses... 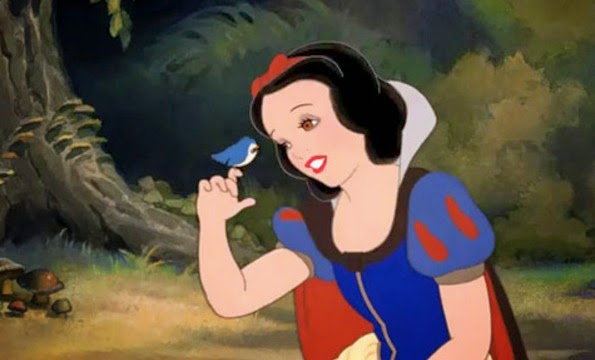 Snow White and the Seven Dwarfs

Snow White - Young girl forced to work for the evil queen. Is hunted into forest. Moves into house with seven dwarves, and keeps their house clean. Gets talked into eating poisoned apple because it's the only red one. 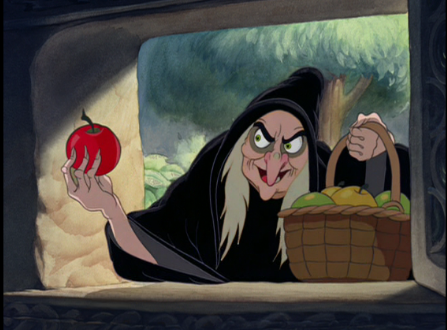 Stranger danger if ever I saw it. 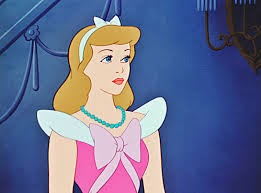 Cinderella
Cinderella - Woman who spends life cleaning house for evil stepmother. Wants to attend big dance, but is humiliated and downtrodden by evil stepfamily. Gets help from Fairy Godmother. Wins Prince with one dance and fantastic shoes. 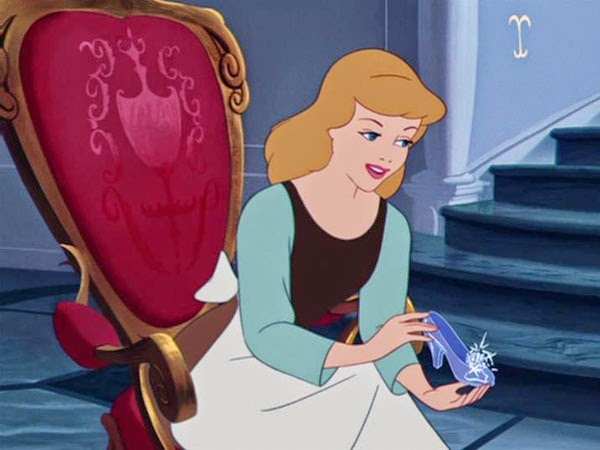 Accessories: You're doing it right. 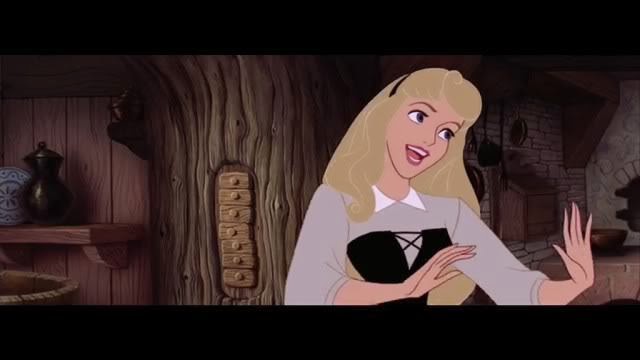 Aurora - Baby's christening leads to evil fairy holding a grudge because she didn't get an invite (I LOVE THIS VILLAIN!). Evil fairy curses baby. Baby is raised by good if absentminded fairies, and falls to curse anyway. Is rescued by her true love. 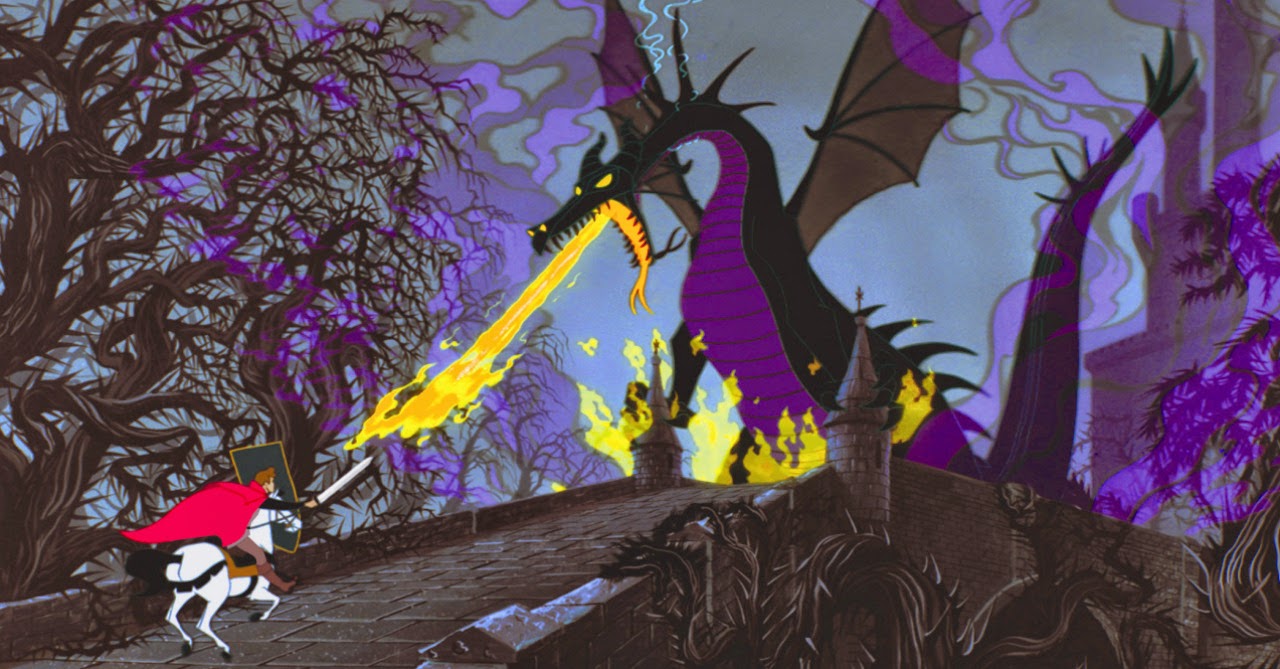 Pictured: Maleficient doing in thirty seconds
what it took Angelina Jolie an entire movie to do


Motivation: Getting far away from fairies. 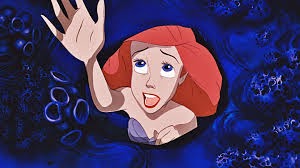 Ariel – Teenage mermaid is in love with the surface world, and falls for a human prince. Her dad destroys her stuff, and she makes a deal with a sea witch. The deal goes awry, and Ariel, Dad and Prince each sacrifice to help the other. Ariel's Dad relents, and turns her human. 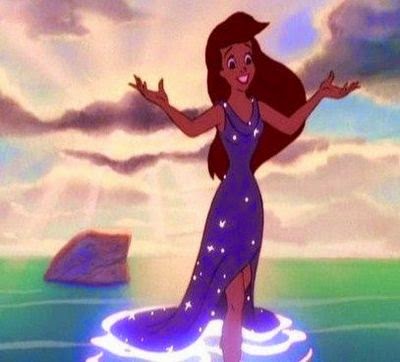 Ariel gets a fabulously sequined dress out of the deal. 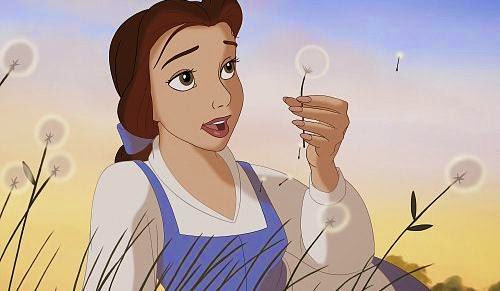 Beauty and the Beast

Belle – Nerdy bookworm discovers her father has been kidnapped by a beast. Trades herself as a captive, learns the beast is more than he appears, and slowly melts his cold heart. Only by loving the beast for what he is, does she find out he’s really a handsome prince. 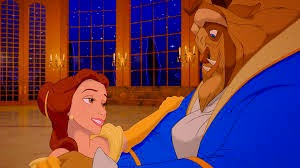 Who kinda looks better as the Beast.

Jasmine – Woman is forced to live in a palace. She is to be married against her will, escapes palace, meets charming rogue, and helps save her kingdom from tyrannical warlord. 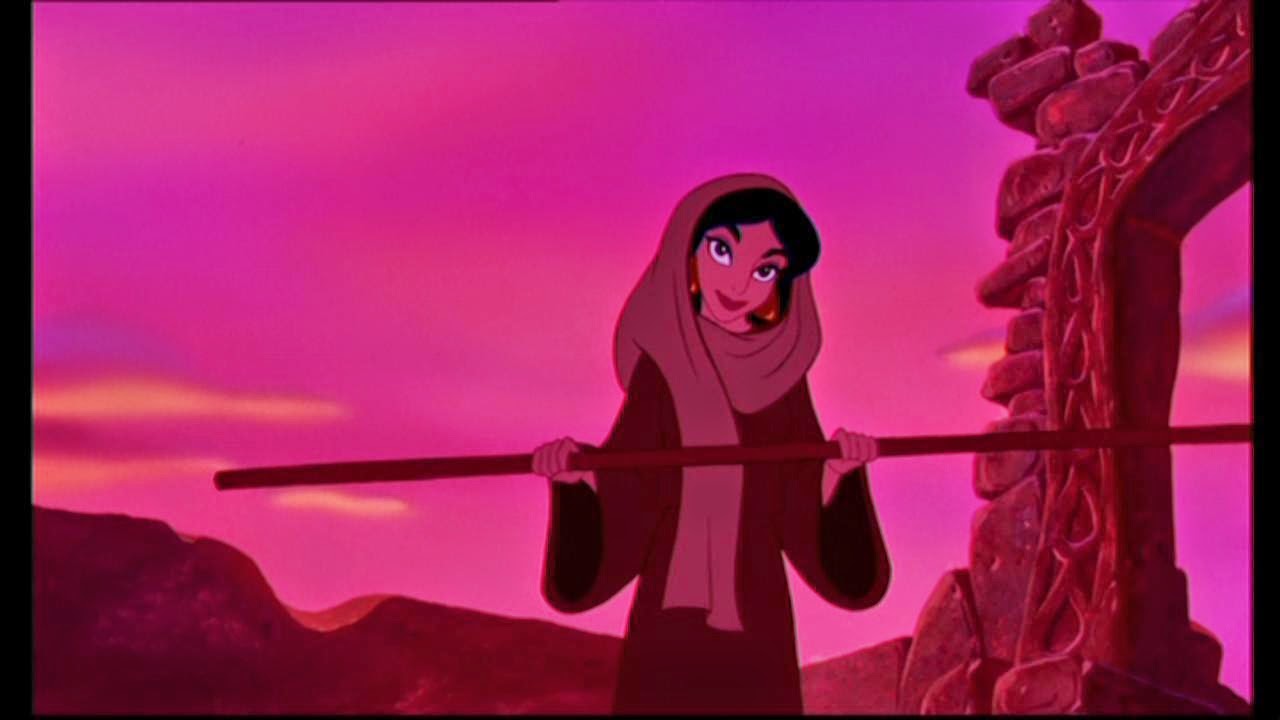 The only Disney Princess who can list
"Pole vaulting" under skills.
Motivation:  Freedom 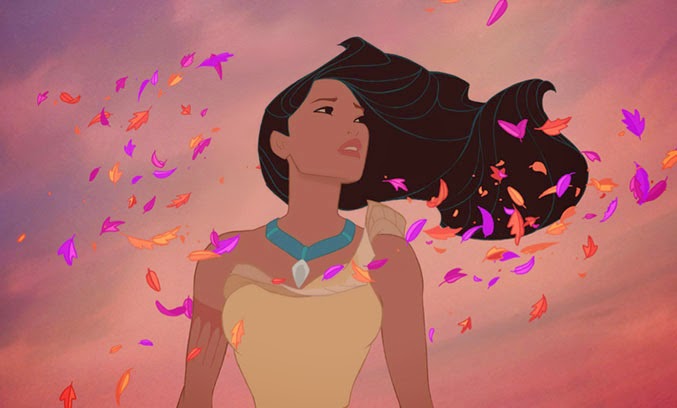 Pocahontas – Tree hugging hippie must save her people from ruthless invaders. Accomplished mostly by singing. Unites the two warring people by love, and helps to foster understanding between her people and the newcomers. 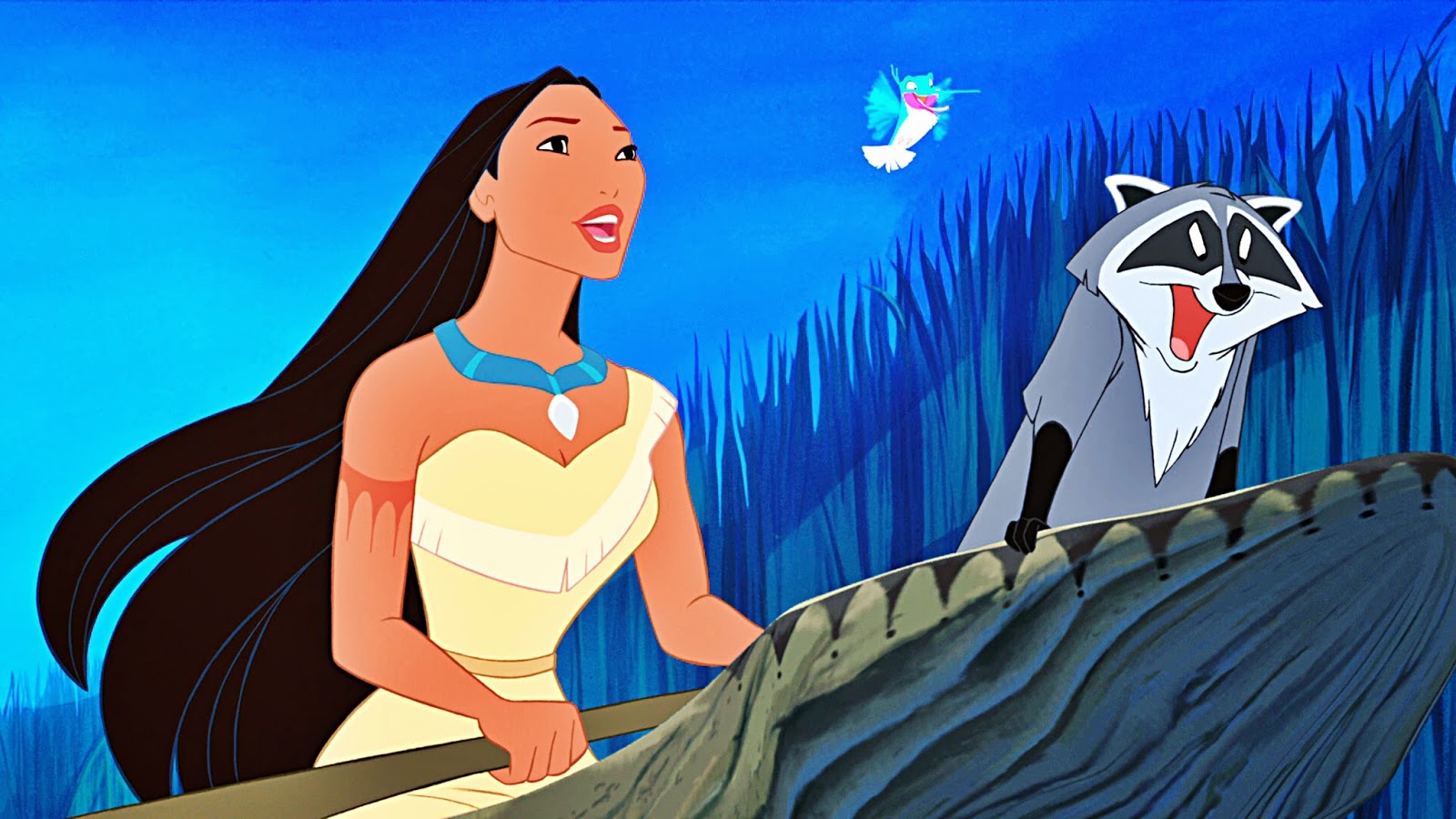 Wait, is her canoe made out of a tree?
Is that what happens when you stop being friends? 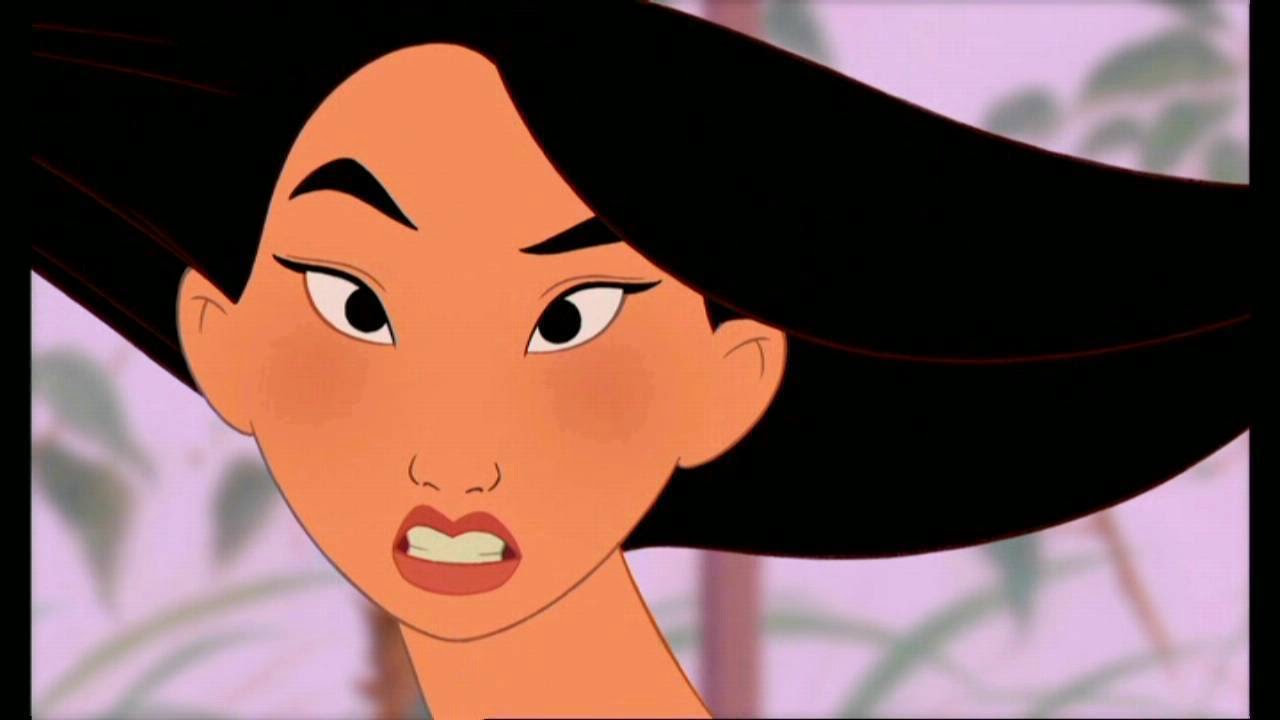 Mulan – Awkward tomboy goes to war in place of her father, disguised as a male. Overcomes tremendous odds in training, and wins the respect of her colleagues. Singlehandedly defeats the Mongolian horde. 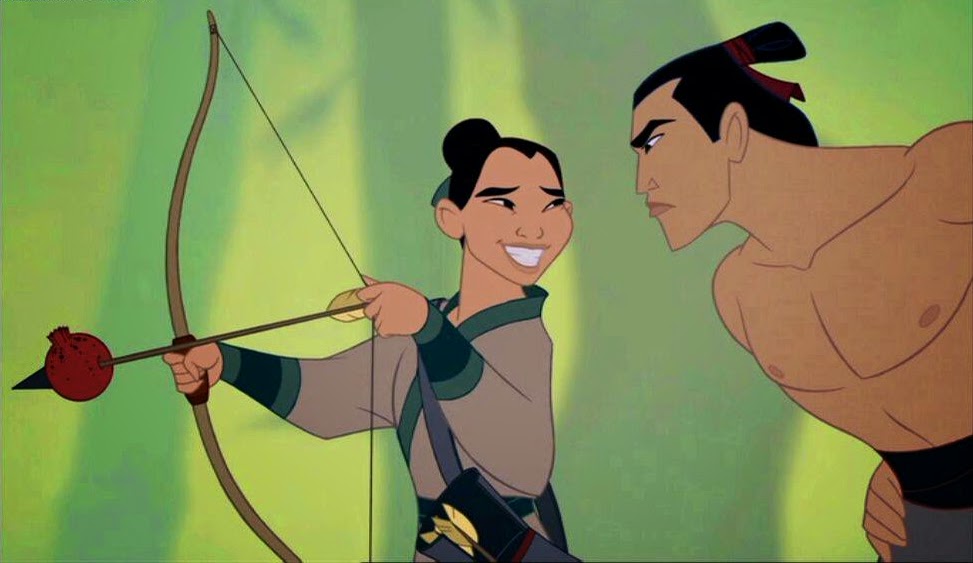 One of them will save all of China.
The other will MAKE A MAN OUT OF YOU! 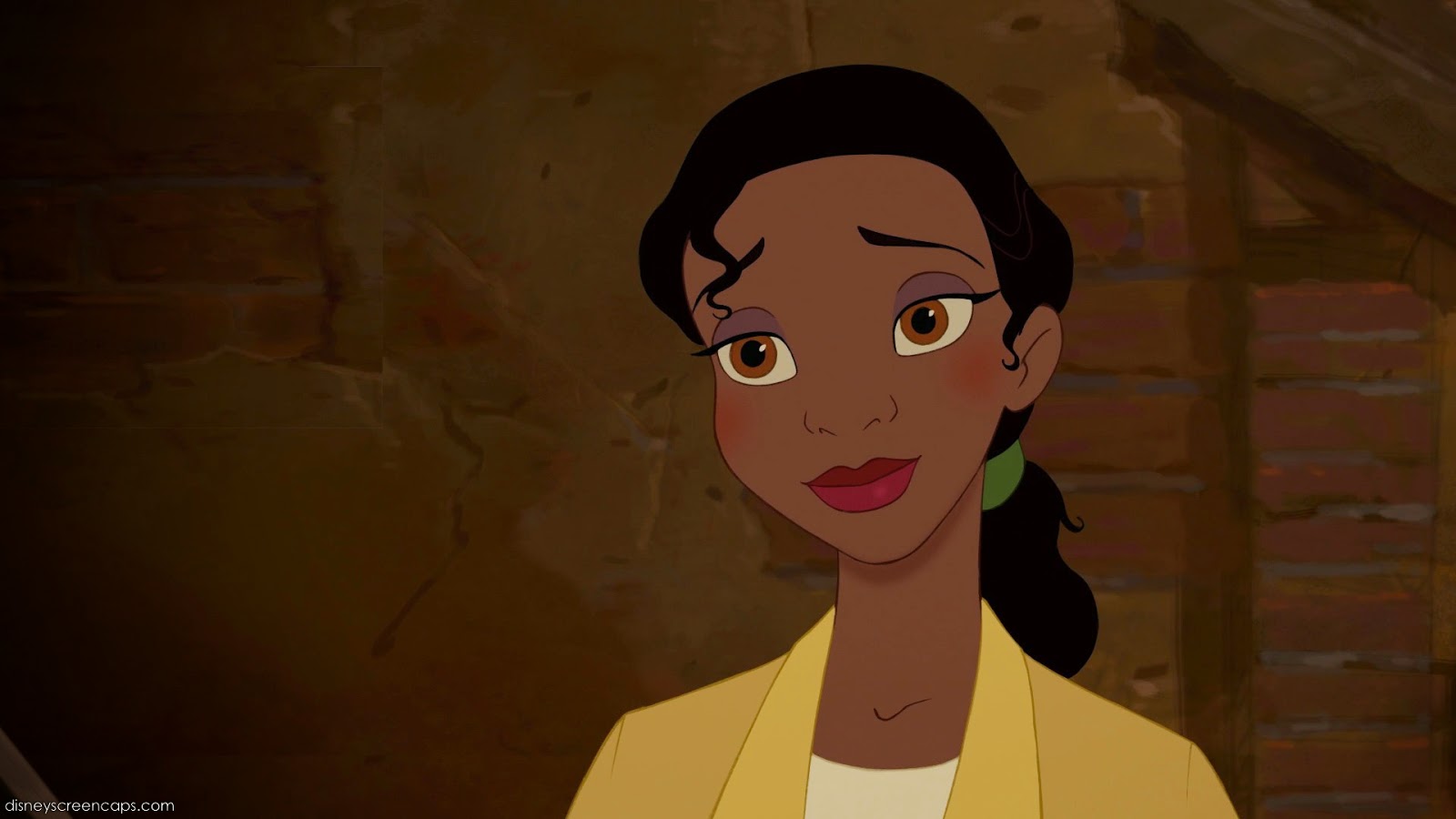 The Princess and the Frog

Tiana – Ambitious young woman wants to start her own restaurant, and meets a talking frog who claims to be a prince. Kissing frog turns her into a frog as well. Defeats a witch doctor, marries a prince, and gets her restaurant. 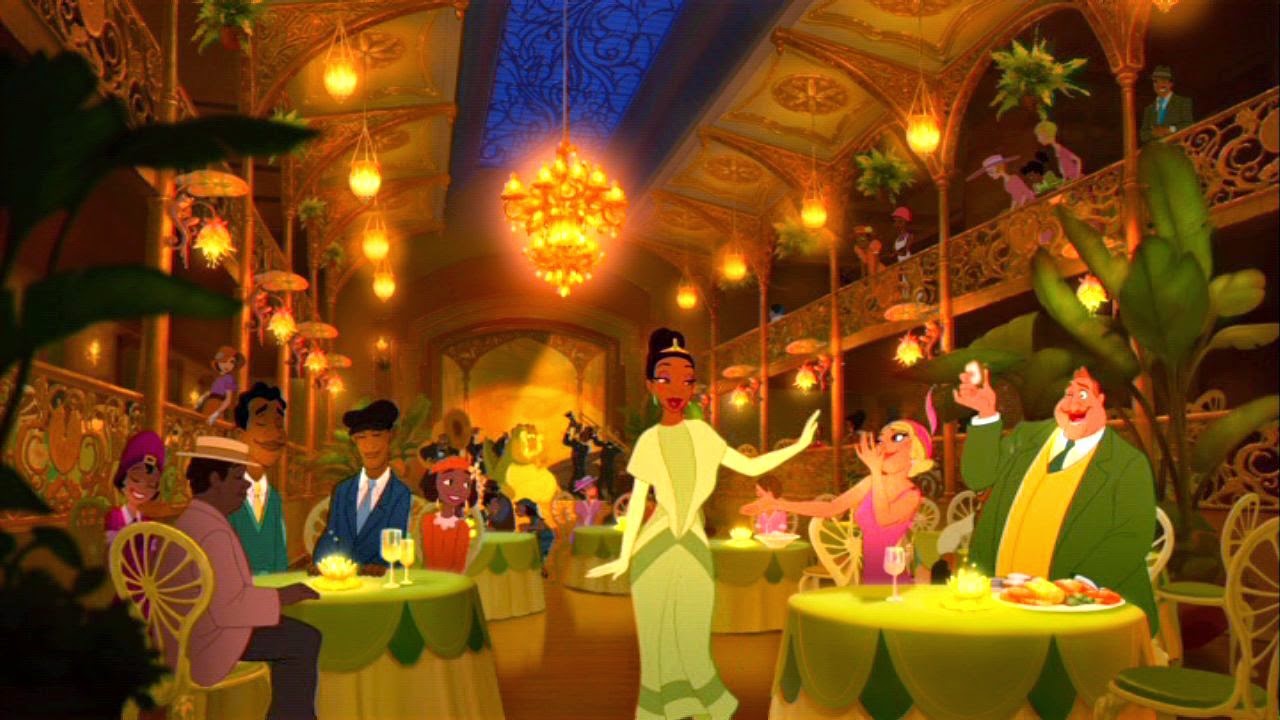 Which is all well and good
until someone leaves a bad Yelp review. 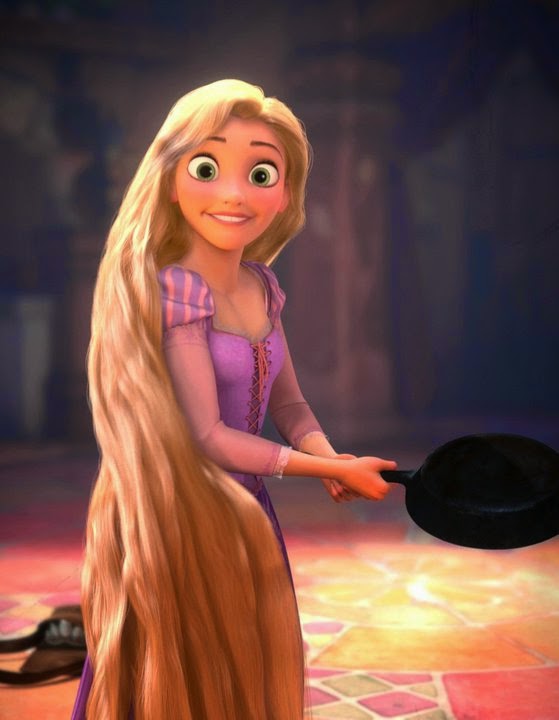 Rapunzel – A woman with magical hair has been imprisoned her entire life. She meets a cocky thief, they escape the tower prison, and have adventures with a horse. She fights evil with a frying pan, discovers that she is really a princess, and is willing to spend her life imprisoned again in the tower to save the thief’s life. Thief sacrifices himself to save her, she discovers the magic is in her and not hair. Reunited with family and kingdom for happy ending. 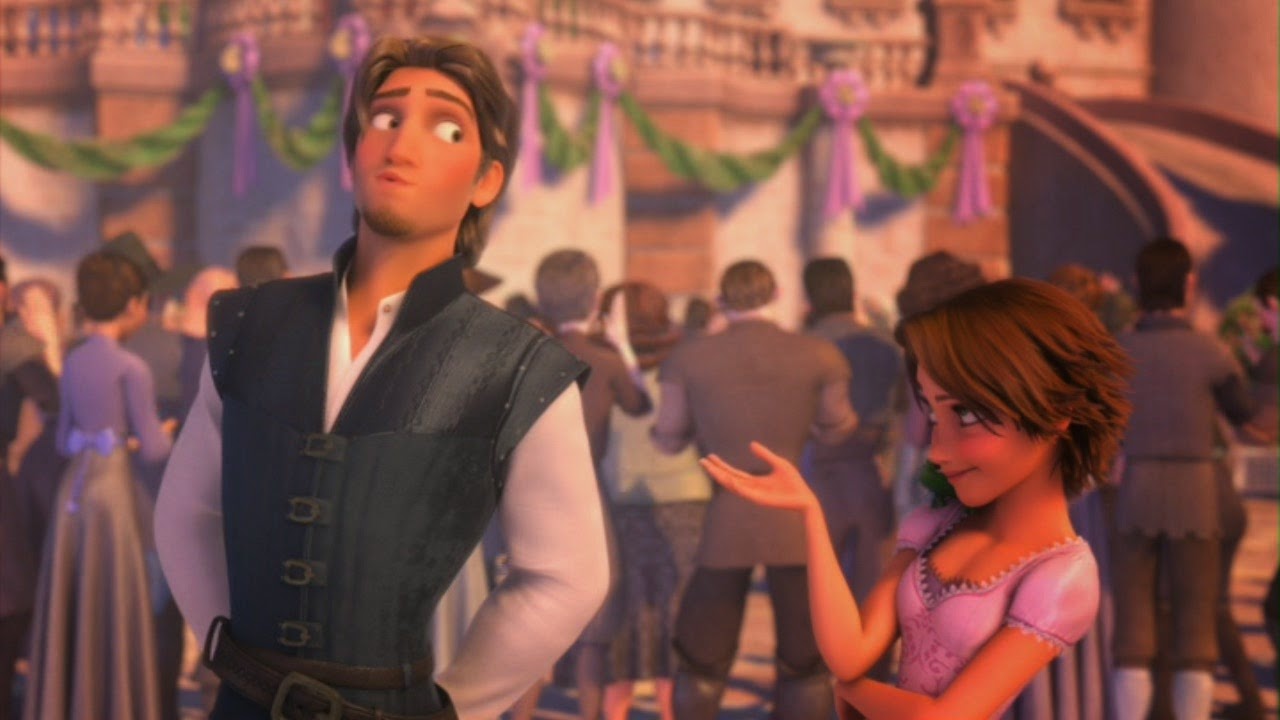 Not going to lie:
I absolutely love this movie. 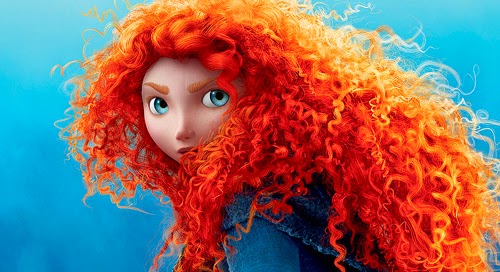 Merida – Scottish lass who is expected to marry. Instead, prefers archery and horseback riding. Mother is turned into a bear, and Merida has to save the day. Only by setting aside her pride, and dropping a menhir on a rampaging bear, does Merida finally save the day. 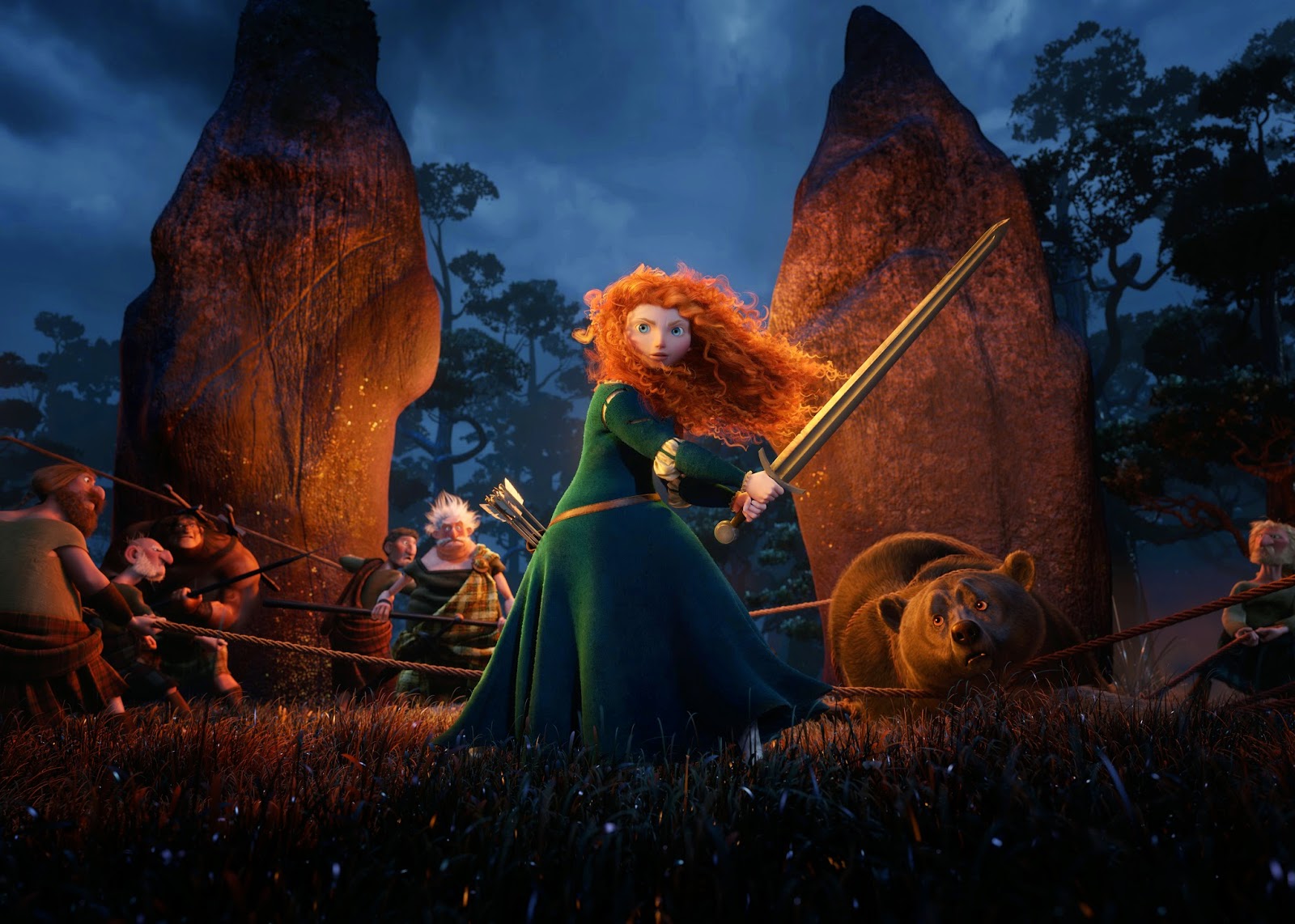 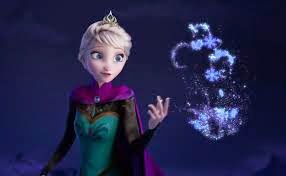 Elsa – Princess who possesses magical ice powers, who accidentally injures her sister. Vows to not harm anyone else, but ends up accidentally freezing entire kingdom. Only after her sister sacrifices herself, does Elsa realize that love is the only way to control her powers. 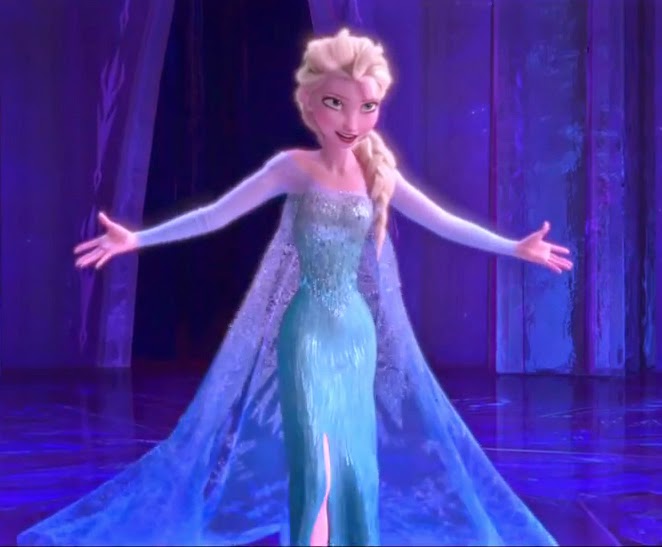 Things Elsa can do:
1) Freeze anything
2) Create living snowmen
3) Say yes to the dress.

Anna – Princess whose sister, Elsa, has magical ice powers, and is locked up to protect others. Not understanding this, Anna reaches out to her sister. Constantly pursuing her sister, it’s only after self-sacrifice that Anna finally helps Elsa. Elsa and Anna are reunited and live happily ever after.

Her: Do you want to build a snowman?
Him: Is that code for something?
Motivation: Unconditional Sisterly Love

Sound off in the comments about your favorite characters and why! And don't forget to subscribe to the blog for your regular dose of Mimsey!

Jay Mims writes books, blogs, and wants to wish a happy birthday to Batman. Jay is far funnier on Facebook then in real life. He is terrible at Twitter.
Posted by JMims at 10:53 AM