Why I HATE the new Ghostbusters trailer!

For those that don't know, there's a new Ghostbusters movie coming out. 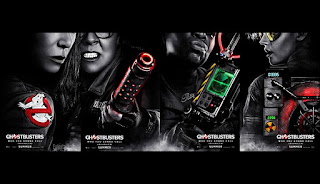 And in celebration of the upcoming event, Sony has released a trailer for the film.


And I absolutely HATE this trailer! So, without further ado, let's jump into the five reasons I have such a strong dislike of this particular trailer!

5) The Jokes:
For those unfamiliar with how trailers and marketing work, you always want to put your best jokes upfront if you're a comedy. If not your best, at the least your second best. For instance, if you remember Men In Black, you remember Will Smith's charming snark, a crappy car with a jet, giant cockroach and Tony Shalhoub having his head blown off. Now, let's watch the trailer:

If you're feeling a sense of deja vu, it's because the most memorable moments of the film are also in the trailer. Well, besides Siobhan Hogan's absolutely fantastic performance as Beatrice (Edgar's Wife) aka the bug guy. Because, yes, Tommy Lee Jones and Will Smith make a charming duo, but I would watch the crap out of Beatrice coming to terms with Edgar being a bug. Like, she thinks everything is alright, then picks up Franz Kafka's The Metamorphosis and it all comes crashing down.

So, let's take a look at the jokes that so defined this new flick. Vomiting ghost, possession by a likable character, random fake-outs. You know what movie also had those exact same jokes? 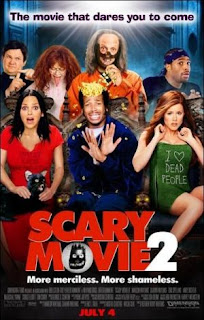 But Mimsey, you would argue if we were sitting at a bar, drinking mojitos...it's a Paul Feig film. It's the Bridesmaids guy! This is where his bread is buttered! To which I'd reply... 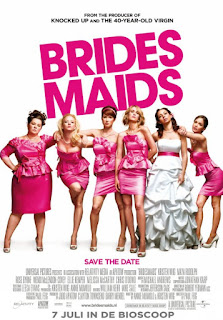 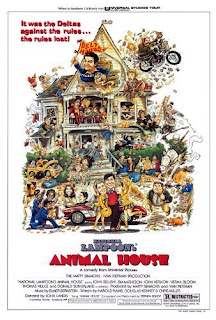 To better understand this GLORIOUS film, view this:

That film was produced by Ivan Reitman and written by Harold Ramis. It starred arguably one of the most talented members of SNL and was a monster success. It also set a sadly unrealistic expectation for college life, even as John Belushi's Bluto would go on to decorate virtually every single college dorm on planet earth. 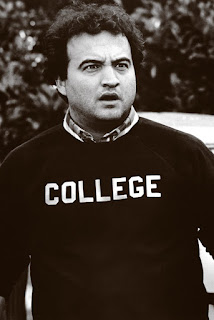 This man has seen some things.
Terrible, terrible things.
Order yours today!

After the success of Animal House, with SNL as a juggernaut, Blues Brothers as a monster hit, Dan Akroyd was being courted to be the next big thing. And he had the perfect idea! Ghost hunters! Because Dan Akroyd's family has a long history with connecting to the supernatural. His grandfather was a spiritualist who corresponded with Sir Arthur Conan Doyle and his father, Peter Akroyd, wrote the book on ghosts. 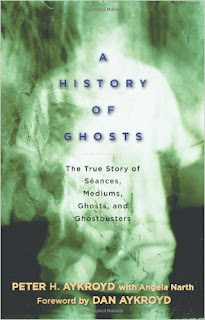 And, do you know how many people transitioned from the raunchy comedy to the weird sci-fi comedy? Ivan Reitman and Harold Ramis. Ivan directed it and Harold started out as the co-writer. Because, as wonderful an actor, comedian, idea man, and paranormal enthusiast Dan Akroyd is, he tends to go a bit overboard. Akroyd had a concept, and through collaborating with comedic geniuses, that concept became something AMAZING! 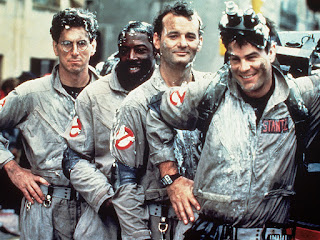 In this photo:
Three members are alumni of Second City
Two had already directed feature films before this film
All four would go on to be critically acclaimed directors

The original Ghostbusters was a perfect storm of talent, ability and collaborative performers. The new film feels like it could literally be any comedy that's been made since 2011. But with ghosts. And speaking of ghosts... 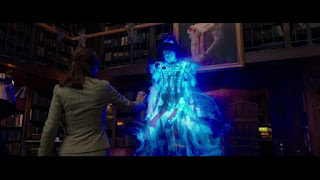 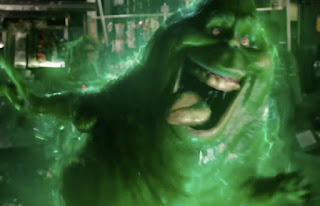 And sometimes they put on an electric light show...
Of green and blue!

Seriously? Why are all the ghosts only two colors? Why are 90% of these ghosts lightbright blue? When I saw that crowd scene, I thought I was watching Dr. Manhattan cosplaying as the cast of Downton Abbey. In fact, I want to see that movie! I want to see a movie of Dr. Manhattan from Watchmen messing around with the cast of Bridesmaids, and it's up to Siobhan Hogan to save the day! 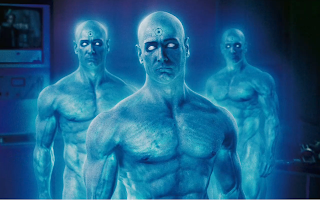 I also suggest watching Smurfs then immediately watching Watchmen.
The experience is SURREAL!
Play this for the best experience!

So, what is going on in this film?

Having seen this trailer about a dozen times, I think I've pieced together the plot: A group of scientists, living in New York, discover that ghosts are real. They are joined by a no-nonsense civilian to combat a sinister force that is amplifying the spiritual forces of the Big Apple. Hang on, that plot sounds familiar:

But wait, we're forgetting an important plot point! Apparently, the sinister force can also possess people! It even turns the lovable, enthusiastic ghost hunter against the others! Only the power of friendship can save the day! No, no, I think I've seen this somewhere before too...

They are cannibalizing the first two Ghostbusters films. Literally! Remember that scene where Melissa McCarthy's character is dangling Kate McKinnon from the window? And how Leslie Jones has to save the day? Well, in Ghostbusters II, Egon and Ray get caught in a fiery bathroom by a vengeful spirit, and Ernie Hudson has to save the day. 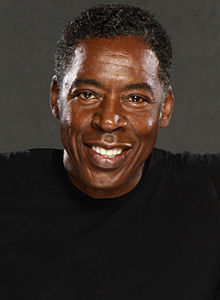 Also, apparently Ernie Hudson is aging like a fine wine.
Seriously, why is this man not getting more work?

As someone with both claustrophobia and a fear of fire, this was pretty much all my nightmares come true. I'm not saying there's anything wrong with the only black character being the one who has to constantly save the white people from themselves, I'm just saying it's weird that the same basic scene happens IN TWO DIFFERENT MOVIES! 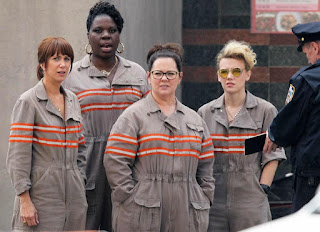 And why do they keep staging it so poor Leslie Jones is towering over everyone? She's a foot taller than all the other Ghostbusters! At least have her slouch or give everyone else a Scully box. FYI: This is a Scully box.

And now, without further ado, the #1 reason why I hate the new Ghostbusters trailer!

1) They wasted a completely amazing opportunity!

Look, you and I both know this movie is a cash grab. They brought in a flavor-of-the-month director, cast the same ensemble he's had financial success with, and stuck some SNL cast members in for synergy. Sony wants to reboot their established property, put a new spin on an old classic, and land that sweet sweet SJW money. And that's totally fine! I have no problem with a new Ghostbusters movie. 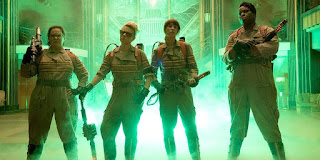 Seriously, did someone buy green lights on wholesale?

But, I hate to break it to you: Nobody likes a reboot! No one. If your property was popular enough to generate interest in a new film, do you know what folks want to see? A sequel! Even the 2009 Star Trek film was a soft sequel, and by the second movie, they were straight-up Face-timing with OG Spock. 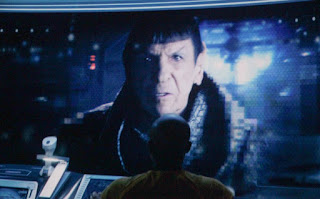 I'm not even joking: I'm 99% sure that white thing
in the corner is a webcam.

Folks, we live in a world where one of the most popular things on Netflix is Fuller House. Admittedly, it is amazing. It's also a spin-off/sequel. 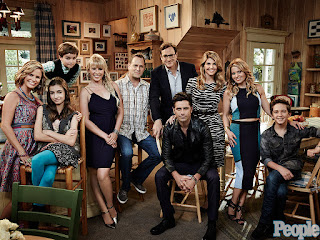 I'm still convinced the whole thing is just an excuse for
a bunch of friends to get paid to hang out with one another.
Bastards.

Why then is Ghostbusters set in a world where no one has heard about the events of the first film? Here's a crazy idea, how about one of the OG Ghostbusters teach a class and end up mentoring his star pupils into becoming real Ghostbusters? Sound crazy? Well they already did it! It was called Extreme Ghostbusters and featured a Goth Girl, a Hispanic dude, a guy in a wheelchair and Carlton from Fresh Prince of Bel-Air. Behold the pure, undiluted 90s that is the opening credits!

To be honest, I'm not sure why every 90s TV show had to play diversity Bingo. I personally blame the Burger King Kids Club. 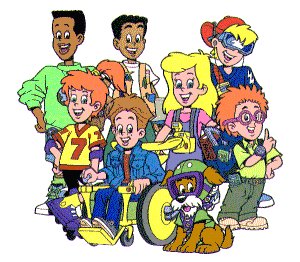 My greatest regret about college was not convincing
my dorm-mates into cosplaying as this group.
It would have been glorious!

So, let's say you want to do an all-female Ghostbusters. How in the name of Zuul does this conversation not begin and end with Janine? 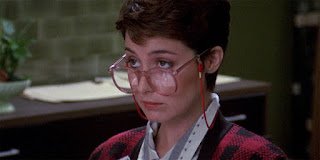 Annie Potts is a national treasure and deserves to be the stateswoman of this flick. If you wanted to keep the science, why not have Janine now teach at a local community college about her time as a Ghostbuster? She got her MBA, the economy tanked, and now she's barely mustering enthusiasm to herd this new crop of weirdos obsessed with ghosts. Melissa McCarthy could be the quirky, heartfelt and sincere one, Kristen Wiig could be the ridiculously brilliant one with poor social skills, and Aisha Tyler could be the six foot tall black nerd. 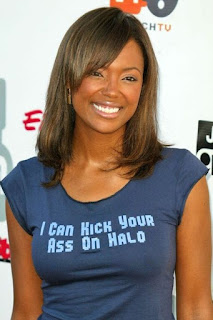 Because in my world,
Aisha Tyler gets to be in everything!

I will admit, I haven't seen a lot of Leslie Jones' work. She seems funny, and if you haven't seen it, she posted an absolutely amazing letter from an MTA worker who was extremely happy to finally see herself on screen! And, you know what? There's absolutely nothing wrong with having Jones' character still be the MTA worker who forces herself into the group. Because, and I know this may come as a surprise to you, but you can have more than one black character in your film.
But wait, you might ask, aren't you forgetting someone?

Kate McKinnon is the best thing in that entire trailer. I absolutely love her role. But, here's the thing! She doesn't need to be one of the scientists! When I was in film school, the guy who supervised the equipment office had no degree, talked softly, and was one of the nicest people you could ever meet. He also built the first drone camera I ever saw, constructed 3D camera rigs in his spare time, and has forgotten more about the art and science of movie-making then most of us will ever know. 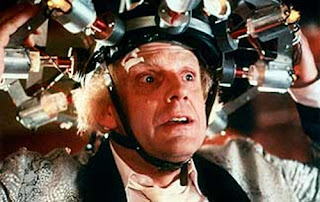 He is basically Doc Brown, but with a goatee.
BTW, they both own Packard's.
Actually, it's entirely possible with enough time
they both could probably build a time machine out of spare parts and a locomotive.

Kate McKinnon could be the quirky tinkerer who manages the lab equipment and has been waiting her whole life for this moment to shine. Think about it: The brash loudmouth, the black nerd, the idealist wallflower and the crackpot get together with a sassy black woman. Throw in a blonde and an SNL alumni, and you might have a hit on your hands! 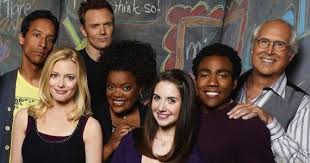 Six seasons and a movie!


So, there you have it. The top five reasons why I hate this trailer. However, there's one final reason I haven't mentioned. See, I was often sick as a kid, stuck on the couch. And, my Dad or Mom would take turns watching movies with me. My favorite film to watch, above Stripes, Smokey and the Bandit and Star Wars (I had eclectic tastes, even as a child) was Ghostbusters. And now, in 2016, this film's coming out on my birthday. 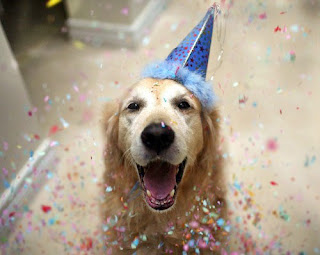 It would just be really nice for this new Ghostbusters to bring the same kind of hope and happiness to other people that the original did to me. I really want this film to succeed, but that trailer is definitely not filling me with hope. Oh, and before I forget, in my fantasy creation of a soft-sequel to the original Ghostbusters, know who the new secretary should be?


EDITORIAL: There's a new fan-made recut of the trailer. I didn't mention it in the main post, because I didn't want to confuse the issue. However, on Friday, March 11, I will be posting more about it. In the meantime, feel free to view it for yourself. Special shout-out to author Patricia Lynne in the comments for providing a link.

Jay Mims has written a fun little Southern-style mystery called The Rose Bandit! It is completely without flaws. Jay has also written earnestly about the passing of the beloved writer, director and Egon, Harold Ramis.  Jay is far funnier on Facebook then in real life. He is terrible at Twitter. Feel free to contact Jay here.
Posted by JMims at 12:35 AM