The shameless marketing of Sloths....

You know, Steve my passive-aggressive Dalek roommate pointed out to me the other day, it's been a while since I used my blog for shameless marketing. Specifically here. I may have done shameless plugs elsewhere, but Steve can't remember them. Though, to be fair, he prefers Tumblr over my blog. 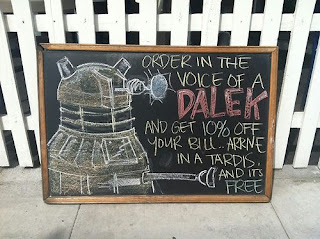 So, I thought "What better way to celebrate Good Friday then with shameless marketing?" This couldn't possibly be a bad idea. 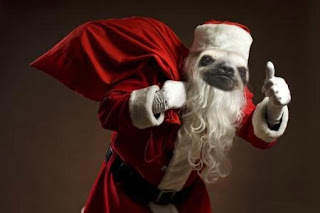 I feel like everyone just knows me as that zany humor guy. The one who does all those silly photos on Facebook. But, see, I'm more then that. I'm complicated ya'll! I got four books under my belt. Well, technically they're under my suspenders, but that's because I have no butt. If I wear a belt, my pants just slip off. Instead I wear suspenders that make me look like I'm wearing clown pants. 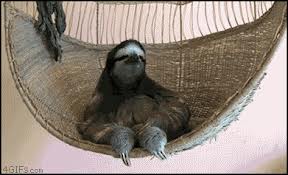 I also have a hammock.
I write murder mysteries, mostly. Well, cozy mysteries specifically. See, cozy mysteries are meant to be lighthearted and fun mysteries. I write those. This may come as a shock to you. 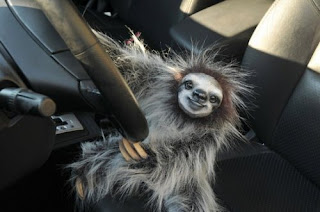 This is what I imagine sloths look like driving to the store Saturday morning,
picking up a half gallon of milk and some bananas. Sloths love bananas.

My first book The Five Santas introduces the world to private investigator Dan Landis, the smarmy detective with a heart of gold and day-glo green socks (he likes for his socks to have personality). It's in this book that Dan finds the body of Santa stuffed behind a dumpster. One body leads to another, and eventually Dan has a serious mystery on his hands. This book also introduces readers to Dan's extended family. Abbey, Dan's partner in crime, and an Art History doctoral student. Gary the police detective who has a love-hate relationship with Dan. Julianne, Dan's sister and Gary's wife, who is also the most successful defense attorney on the East Coast. And rounding out this little group are Professor Leroy "Doc" Brown, Dan's sometime traveling companion and friend, and Bernadette Wilkins, MD the only woman who can make Dan blush. 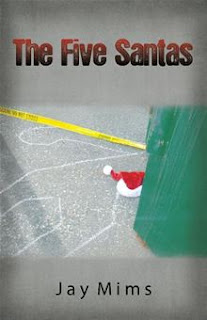 And that's not even counting the Cowboy, the mysterious redheaded woman
or the guy who may or may not be the real Santa Claus.

That book inevitably leads to book two The Cult of Koo Kway where Dan, while driving a grumpy hungover cowboy to jail, has a flashback to when he met Abbey. A lot of people get confused about the flashback in that book. Presumably because I didn't wave my arms around and go "Doowadup Doowadup Doowadup" and the pages get all fuzzy. That book has Dan discovering that the Gullah people are a real thing, getting beat-up a lot, and making a new friend. Both books set-up stuff for book three. 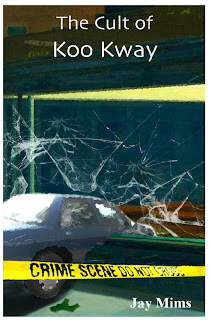 Book three is due out in the Fall. It's called The Gray Ghost Inn. I will be posting excerpts on the book as we get closer. Book four, Racing the Storm, will probably come out 2014. Because life happens. 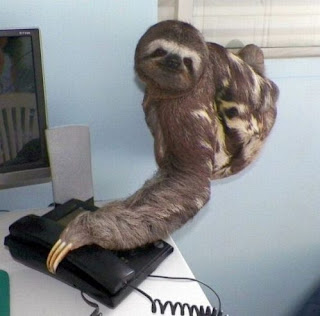 I don't actually have an answering machine. That voice you hear is Steve.
He just screams my messages back at me. And then grumbles about how
I never buy pen and paper so that he can write a message down. He grumbles a lot.

I have the plans laid out for thirteen Dan Landis books. I'm breaking it up into three four-book arcs. Plus the final book. I was going to call the final book Dan Landis and the Deaf Hollers but J.K. Rowling's lawyers said "No." Actually they didn't say anything. Steve intercepted the letter, because he's been submitting Luna/Neville slash fiction hoping to make it canon. He calls them Luville. My passive-aggressive Dalek roommate's got an OTP ya'll. 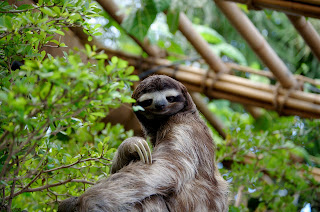 And now you will read "My Immortal" in the voice of Steve.

I think that I will know that I have truly made it, if someone writes Dan Landis fan fiction. Or, if I can just afford a swimming pool in the shape of Dan Landis. 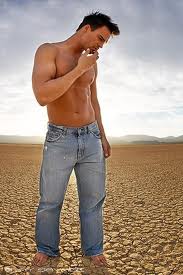 This is not Dan Landis. But, this was one of the few photos I could find
of Chris Winters with pants on.
As always, I look forward to the future, to the continuing growth of my readership, and my continuing improvement as a writer. If you like what you've seen here, please feel free to tell your friends, pick up a copy of my book or send me a note. You can find me all over the interwebs.

And in conclusion, allow me to leave you with my favorite Sloth Photo. 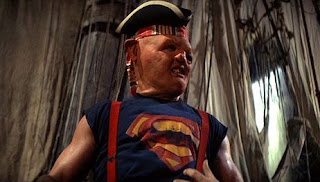 Jay Mims owns a hat, and drinks far too much Dr. Pepper. His goal in life is to one day snuggle with a sloth, assuming that sloths snuggle. He writes books and is far funnier on Facebook then in real life. He is terrible at Twitter. His next book "The Gray Ghost Inn" is due out Fall 2013. Feel free to email him here. Don't forget to subscribe to the blog for a regular dose of Mimsey.
Posted by JMims at 9:07 AM