Gotta Get Back In Time! Mimsey's Top 11 Favorite Time Travelers: Brought to you by THE TEST OF TIME

I'll let you in on a secret. You're a time traveler. I'm completely serious. You, right now, are traveling through time and space. Hurtling actually. So is everyone else you know, and most of the people you don't. So, since we've mastered the art of traveling FORWARD in time, how about we start working on going BACK! Get on that Apple. I want my iTime Machine.

Now you're just messing with me...

With time travel in mind, it's time to get BACK IN TIME! 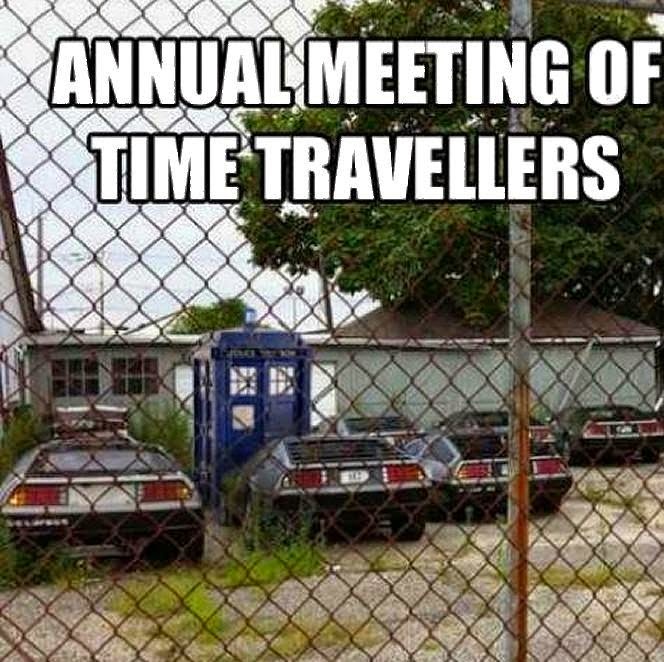 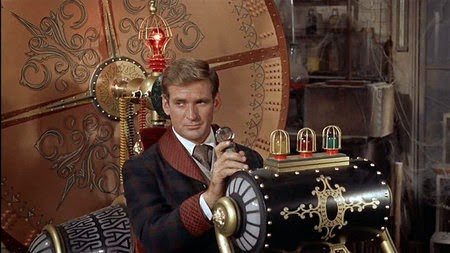 You know, if you're going to go back in time, why not do it with some style? From the giant wheel to the blinky lights, I love George Pal's time machine. Also, is it just me, or is that dude absolutely WINNING at time travel? Got on a suit and tie, traveling through time via a blinged out lever, and with the winningest facial expression possible. I salute you. 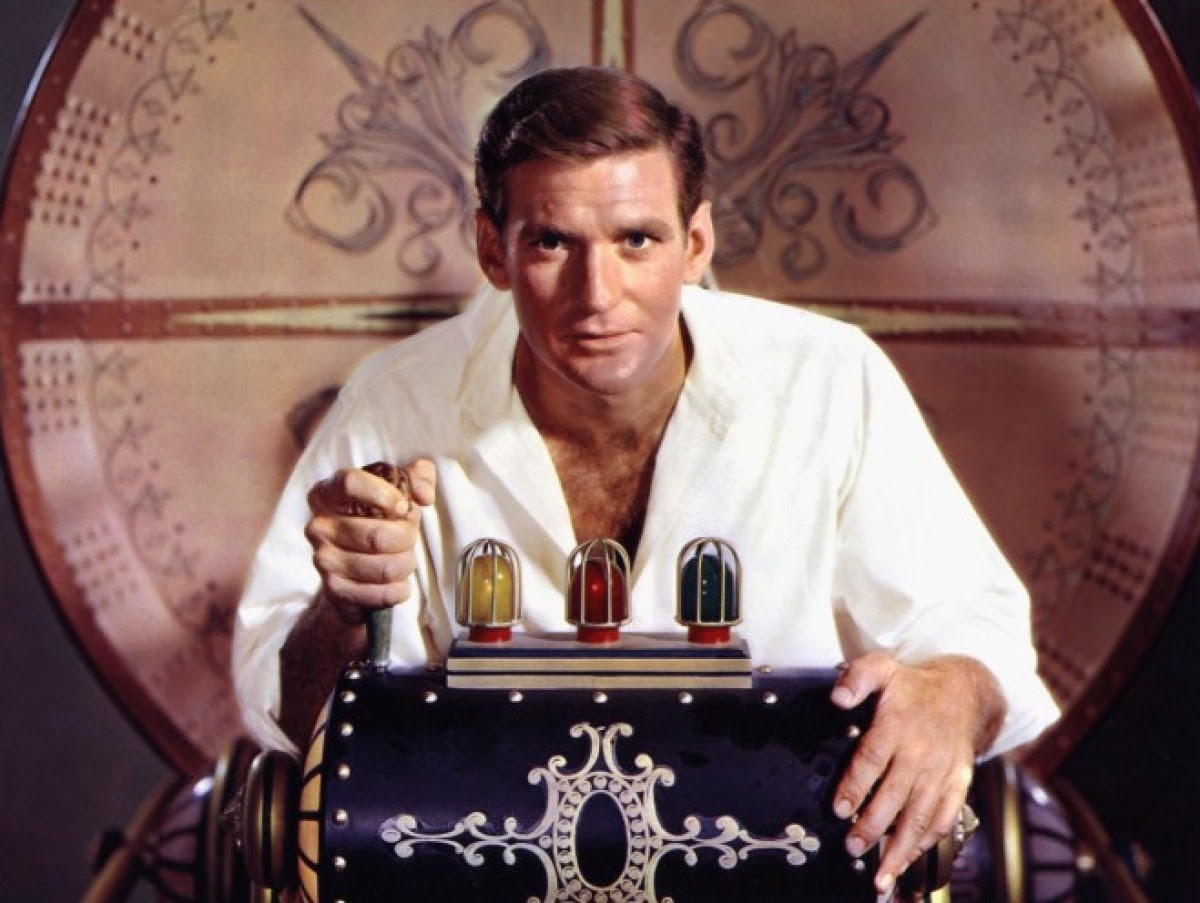 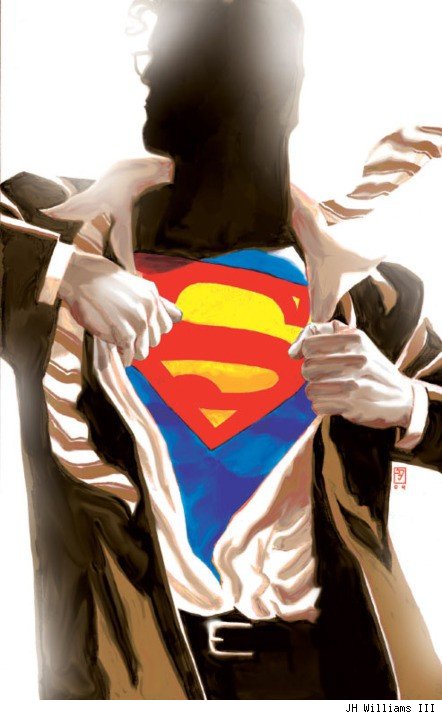 Most people, when they think of Superman, think of the guy who flew around the Earth so fast he reversed time. And that's a great scene. But, I think it would have been much more interesting if Superman had used his treadmill to zip through time. That's right, Big Blue has a treadmill just for time travelling. If he's anything like me, he also uses it as a place to drape clean laundry. 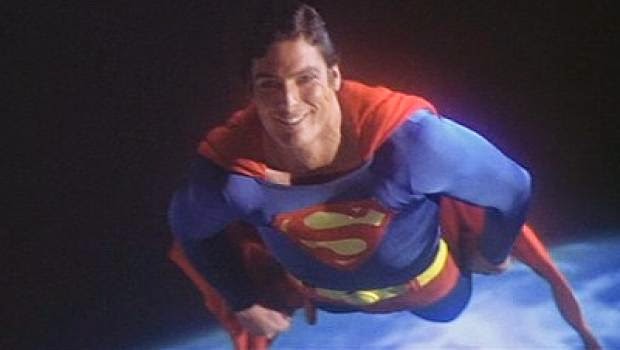 This isn't the only Christopher Reeve character on this list. 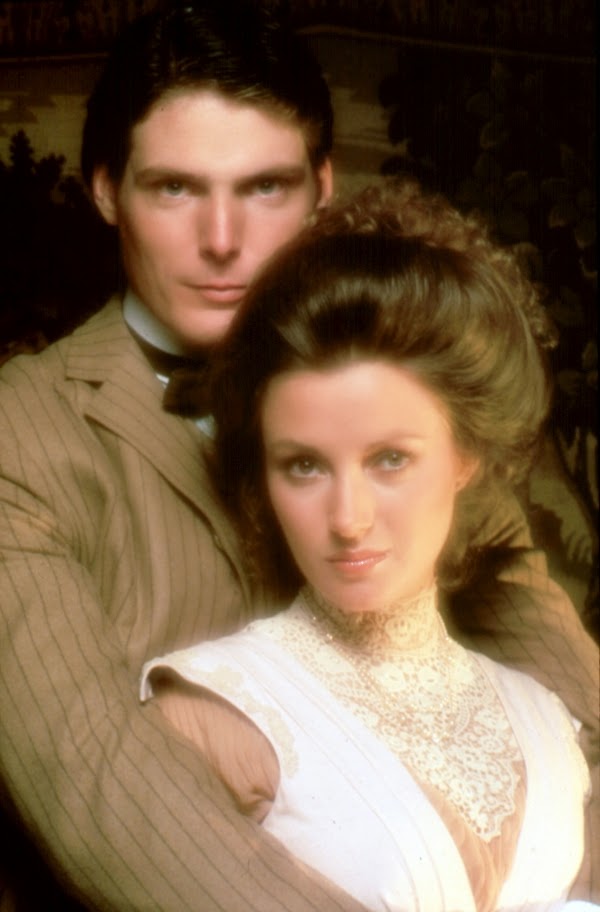 Told ya.
Trust The Mims.

It's been my experience that if you get a group of two or more women together, at least one of them loves this movie. Maybe it's the inherent romance of love across the boundaries of time, maybe it's Christopher Reeve's bedroom eyes, or maybe people just really like the idea of Superman and Dr. Quinn, Medicine Woman getting together. Whatever the reason, this is definitely in my "Date Night" movie rotation. 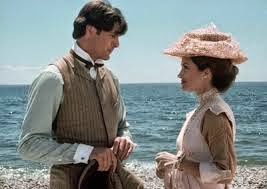 You will believe a penny will make you cry. 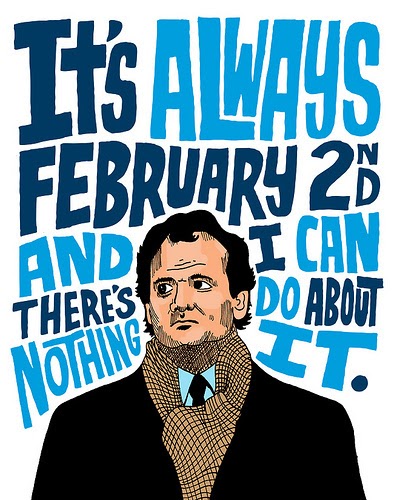 Groundhog Day is easily on my top ten favorite movies, which given that it's directed by Harold Ramis, that shouldn't be a huge surprise. And a big part of why the movie works, is because of how believable the time travel is. Phil Connors is a huge jerk, and it's entirely within the realm of belief that the universe would trap him until his attitude got better. Watching Bill Murray develop a better attitude is like 90% of his best movies.

Behold, the charming Murray in his natural habitat.

I have a lot of love for this series, for the concept that somebody could spend their life attempting to put right what once was wrong. If you're noticing a pattern among these entries, it's that I like for time travel to be a force for good. And in all sincerity, this could at times be a very GOOD show. 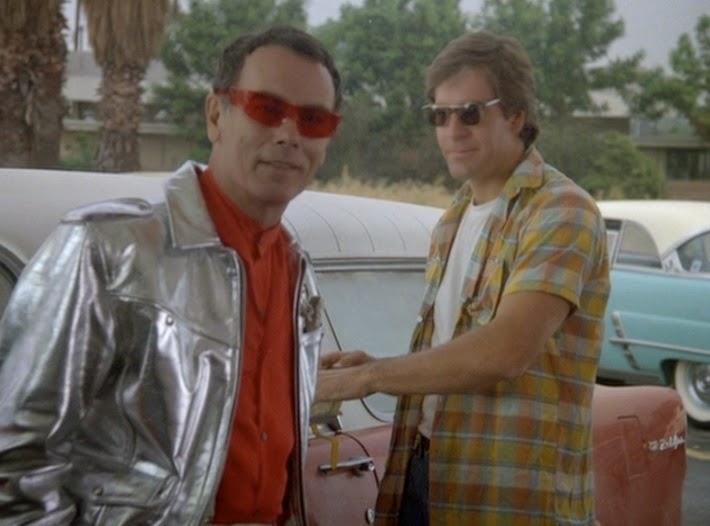 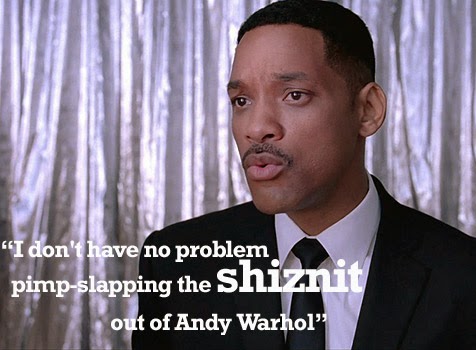 I like Will Smith. I like the Men In Black movie series. And, despite it's flaws, I really love this movie. Josh Brolin has to be one of, if not the most, under-appreciated actors working today. His Agent K is amazing, and I thought it had one of the more quirky uses of time travel. Plus, this flick gave us my favorite Pitbull line "I'm tryin' (to) make a billion out of fifteen cents."

Seriously, I'll start singing that line on my way to work.
In fact, I'm doing it right now! 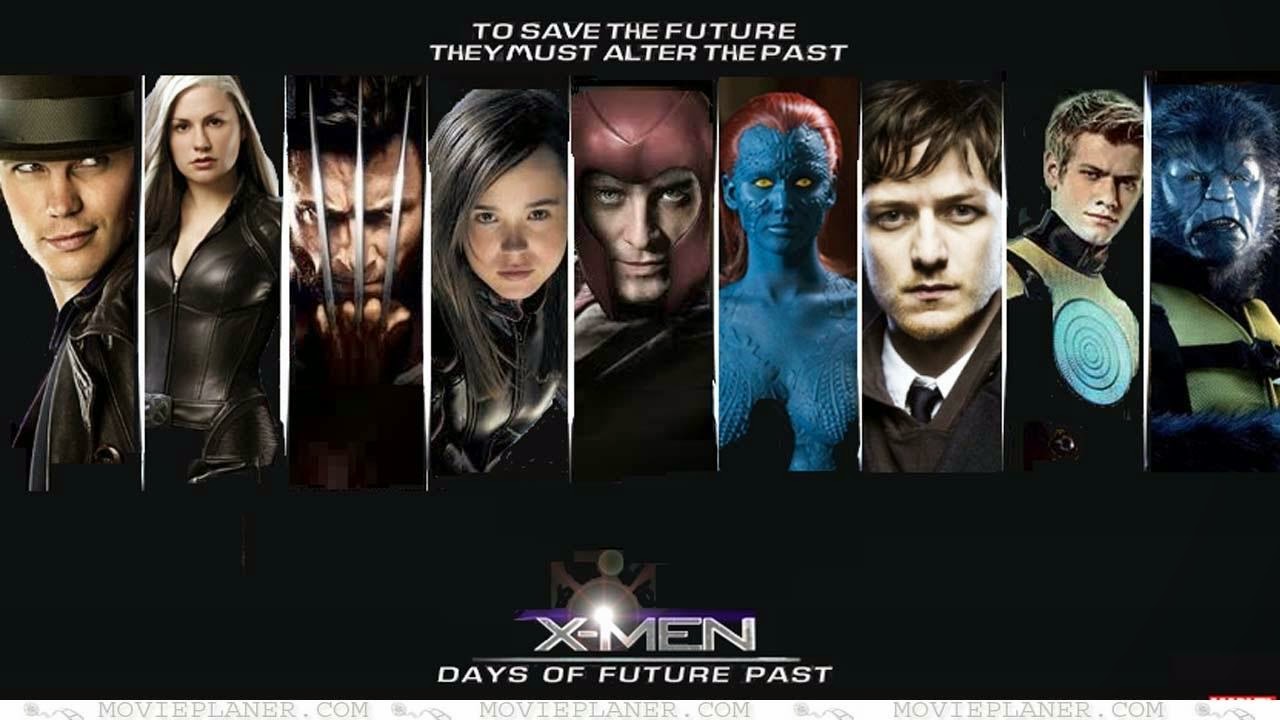 X-Men has travelled through time so much, they have an express pass. Not only that, but they have MULTIPLE teammembers who are time travelers themselves. And that's not even getting into the fact that Cyclops has: A daughter from a dystopian future, a son from the clone of his greatest love, and has a younger version of himself and said greatest love running around. Comics everybody! 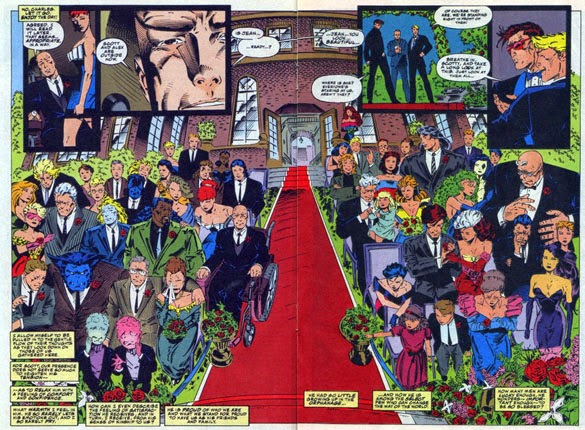 This was his wedding.
I'm pretty sure at least two paradox's
are taking place in this picture alone. 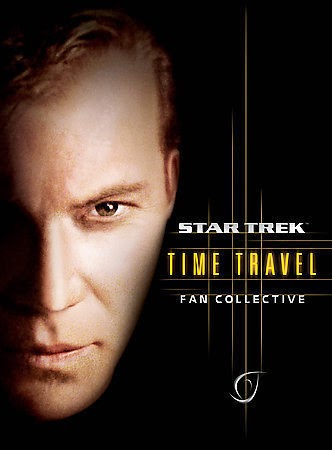 So, not only does Star Trek hold the monopoly on amount of characters who've traveled through time (hint: ALL OF THEM!) but, they even have the market cornered on methods. You can slingshot around the sun, grab an Orb, have a transporter accident, catch a ride from the Borg, or even travel through the GIANT TIME PORTAL! Dealer's choice. There are far too many time travel stories to recount, but one of my favorites has to be "Cause and Effect" from The Next Generation. It's not only a great time travel story, it also features great detective work from Dr. Crusher. I love me some Gates McFadden! 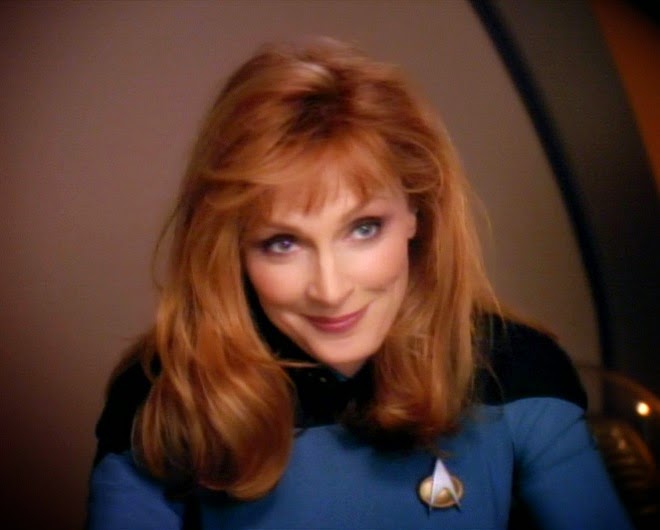 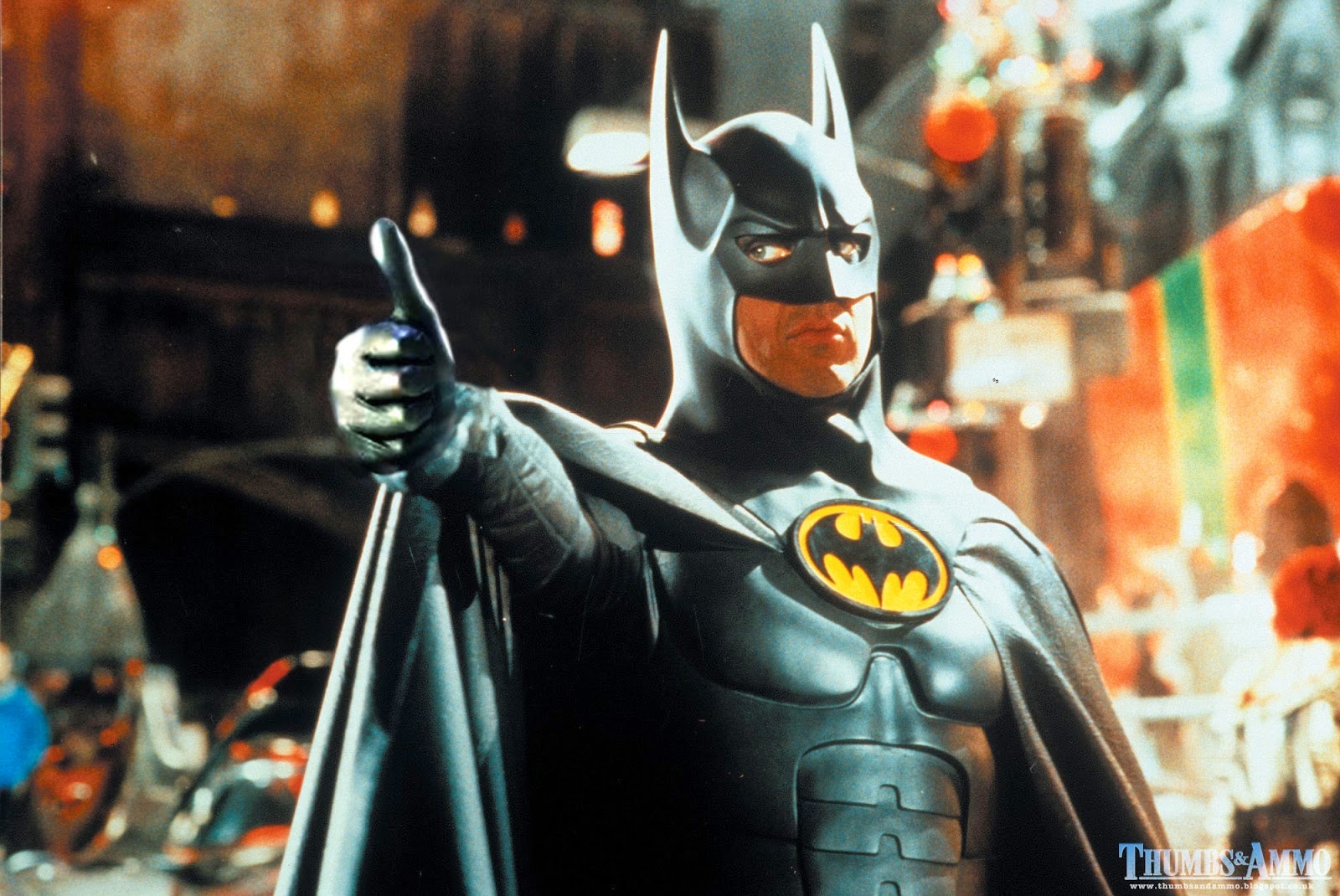 Though not as ubiquitously known for time travel as some of his other colleagues, The Dark Knight still gets to have fun time travel adventures. What puts him above the others is also what makes him so great as a character. He is ALWAYS prepared! ALWAYS! You plop Batman in Ancient Greece, the Wild West or on a pirate ship, he is ready to roll!

Then there was the time he teamed with Abraham Lincoln...

2) The Doctor (Doctor Who franchise) 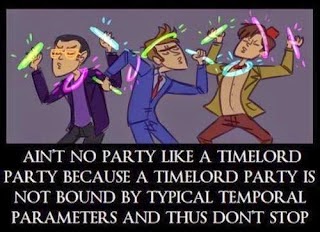 I've written extensively about Doctor Who but suffice it to say, I love this show. And The Doctor is one of the more enjoyable time travelers out there, if for no other reason then he seems to have a very sincere love of traveling. He may not know where he's going, where he'll end up, or what'll happen when he gets there, but by golly it's going to be FUN!

Also, his TARDIS is alive.
Their relationship is COMPLICATED.

1) Marty and Doc (Back To The Future franchise) 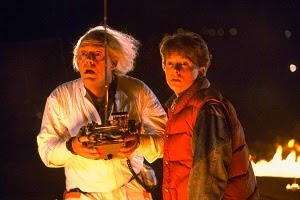 I love Back To The Future. I love the three movies, the ride, even the old cartoon. There's something inherently enjoyable about a mad man who converted a Delorean into a time machine, blasted his dog to the future, and then sends his best friend into the past. Shenanigans ensue. And if given the choice, how would I want to travel through time? The best way possible! 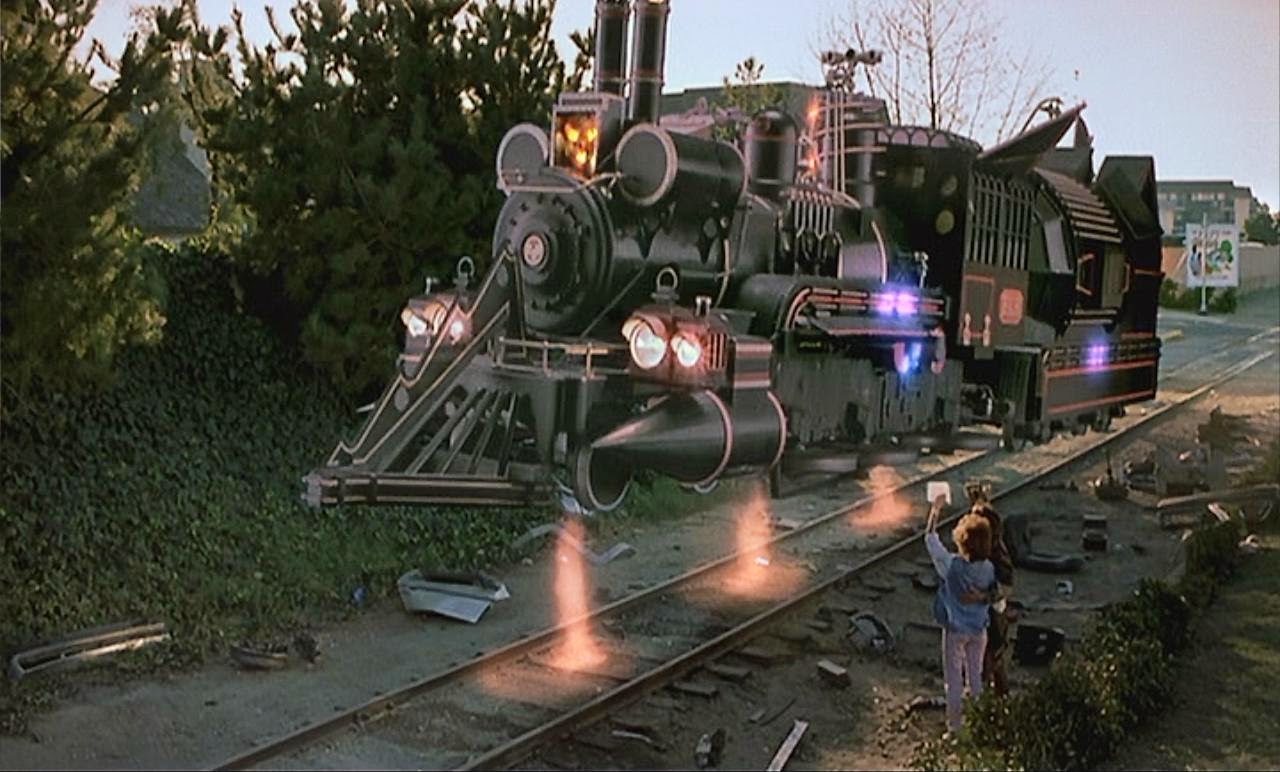 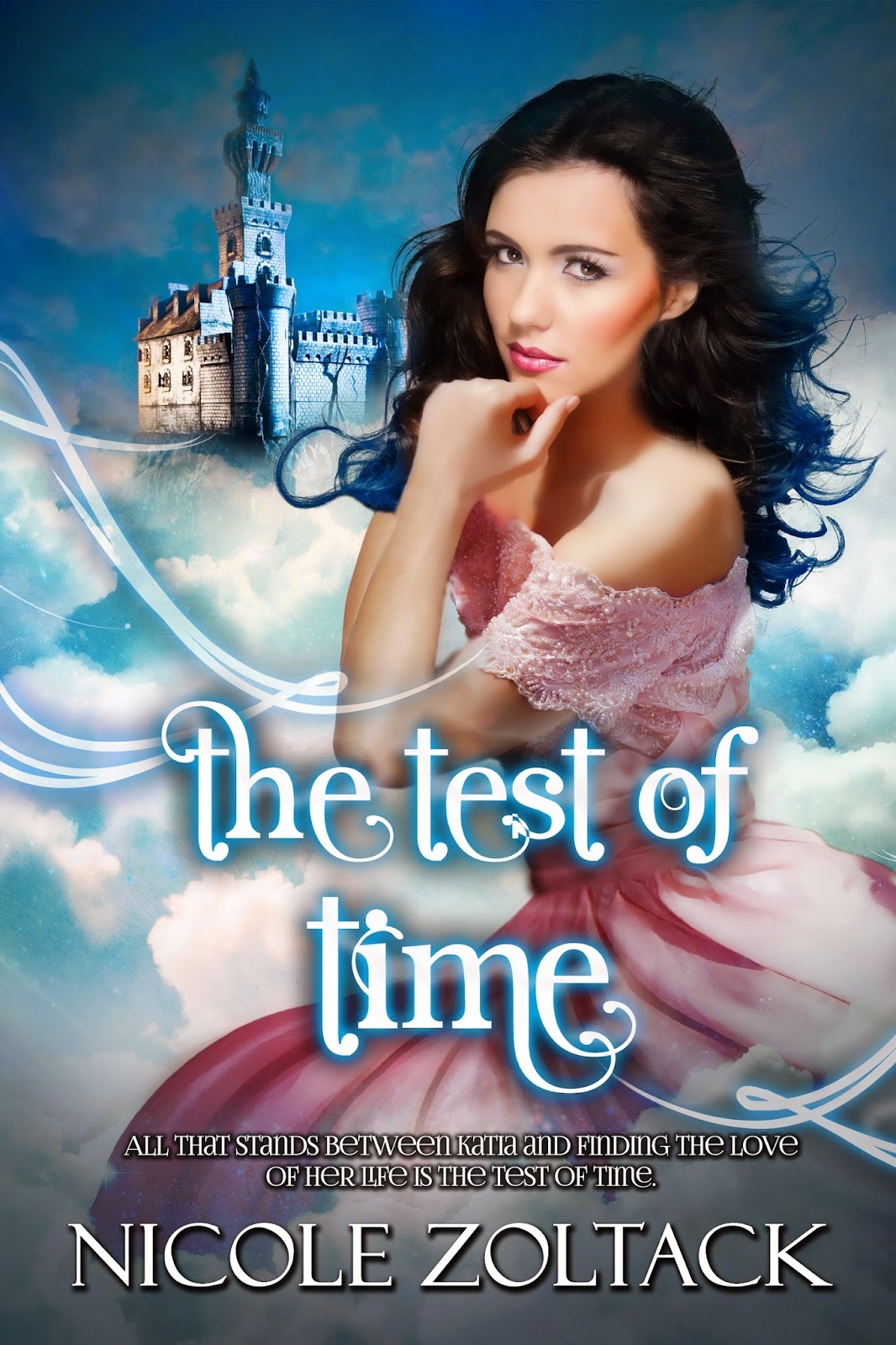 BLURB: Katia jumps at the chance to go to England with her best friend after Rose ditches her deadbeat boyfriend. While walking through the market, she spies a large mansion and recognizes the guy out front as her high school friend Tony. Just as they start to reconnect, Katia passes through times and lands in the arms of Lord Landon, who looks like Tony but certainly doesn’t act like him.
Soon, Katia learns that this 1815 is different from the one in history books. Trapped in a parallel world, Katia struggles to not fall for Landon but his charm proves too much for her. Just when she is about to confess her love for him, Katia travels through time yet again.
The course of love never did run smooth and if Katia can’t figure out and master the test of time, she’ll never see or friends again, or worse, never be reunited with Landon.

THE TEST OF TIME releases September 9th! Be sure to add it on Goodreads!
Posted by JMims at 12:20 PM