Six Santas And A Movie: A Very Mimsey Interview With The Director Of I AM SANTA CLAUS

I'm a bit of a Christmas nerd. Anyone who knows me probably already knows that. And has been forced to listen to a random burst of Christmas music.


Muppets is always a good go-to.

What a lot of people don't know about me, is that I'm also a huge Professional Wrestling nerd. In fact, one of the reasons I decided to even become an author, was that I read the funny, articulate and touching autobiography of wrestling legend Mick Foley. 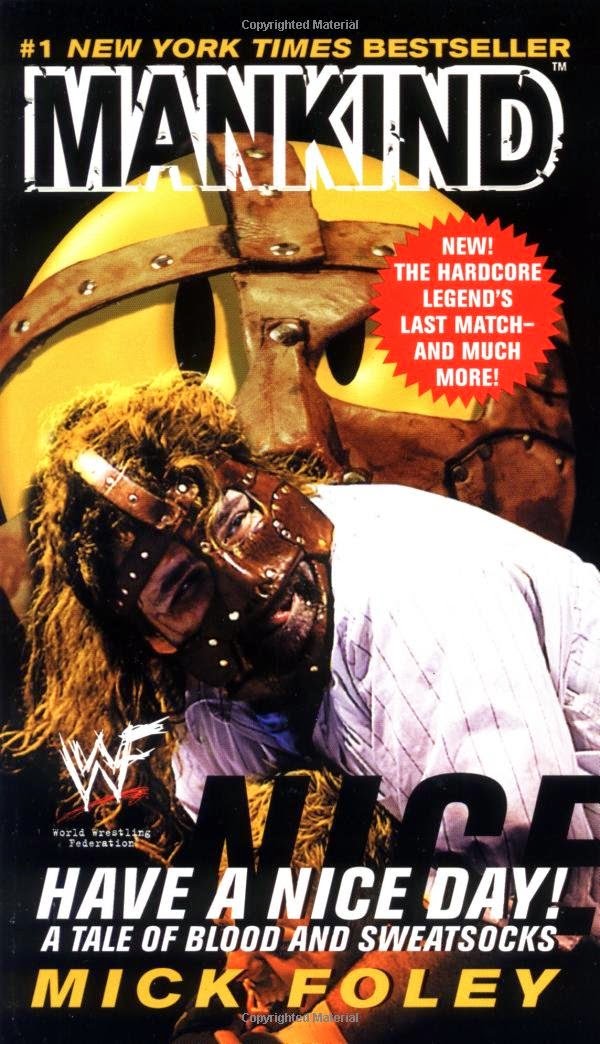 Imagine my surprise when I found out Mick Foley was in a documentary about Santa Claus'. A movie focused on the men who portray Santa Claus. Mick Foley is Santa Claus! 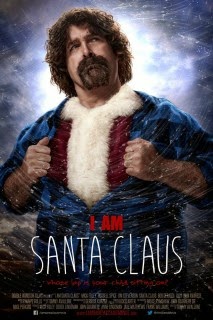 Six Santas And A Movie:
A Very Mimsey Interview With The Director Of I AM SANTA CLAUS

I got the very awesome opportunity to sit down with Tommy Avallone, the director of I Am Santa Claus. Tommy is an actor and producer, and easily a far bigger wrestling nerd then I could ever hope to be. He also ran for the mayor of Haddon Heights, New Jersey.


Tommy's beard has done more charity work then I could ever hope to do.
Tommy is awesome.

Thank you so much for being with us here today, can you tell the audience at home a bit more about yourselves?

My name is Tommy and I’ve been doing video for a longtime. In 2009 I directed a movie called Community College. And in 2012 I started directing the documentary I Am Santa Claus.
I like doing documentaries because I hate working with actors. I hate directing actors.

What made you decide to do a documentary on Santa Claus?

I find people interesting. Me and my wife were walking around a mall and I said “I wonder what life he goes back to on the 26th." 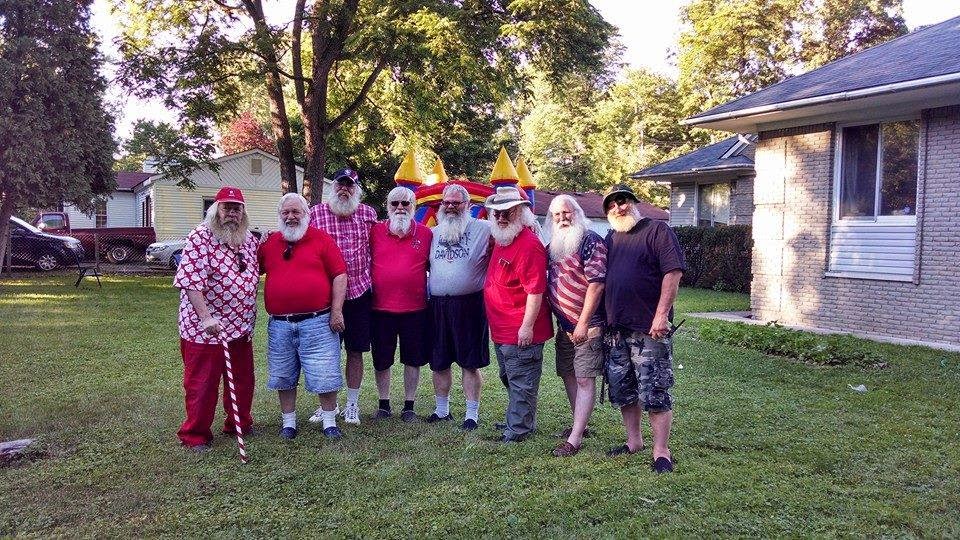 Have the jolliest BBQ's ever.
Apparently.

We pulled the trigger and did a documentary.I always do that with a lot of people. What about that guy? I always look at people and figure out what they’re up to. For better or worse. 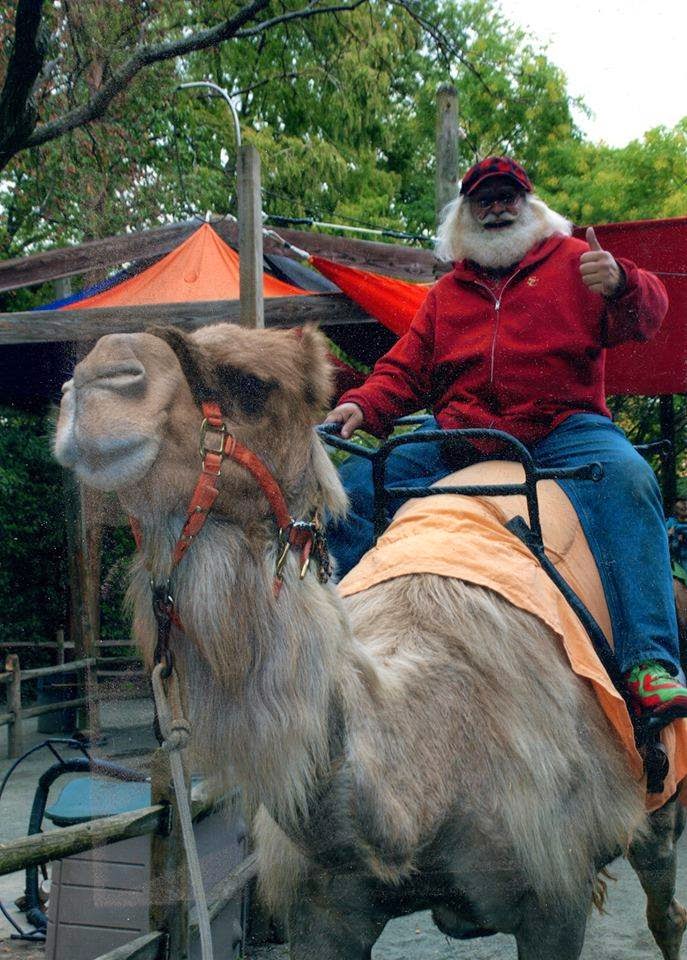 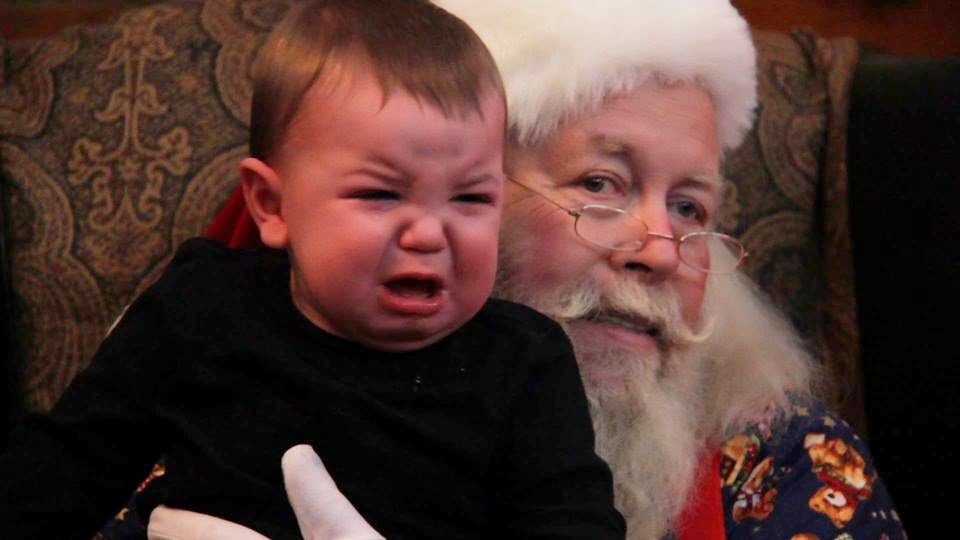 Did you do a lot of research ahead of time? How much time did you spend filming each of the Santa’s?
When I realized I wanted to make a documentary, I reached out to people who did documentaries. Unlike scripted movie directors, documentary guys will be cool enough to get back to you. My research was more or less how people made documentaries. And then I started finding out about Santa’s. Googling a couple. I even ran into a guy who looked like Santa Claus at a horror film festival. And I said “Are you Santa Claus” and he gave me his business card and he's actually in the documentary. 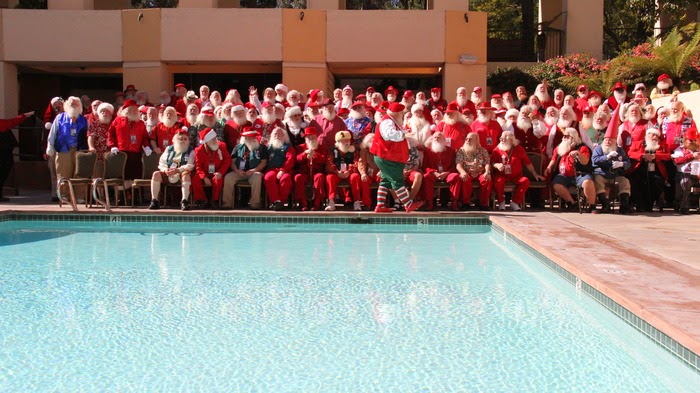 He's the one with the beard.

And there’s six Santa’s in a ninety minute movie so they have to be interesting for at least twenty minutes. You may want to check my math on that. 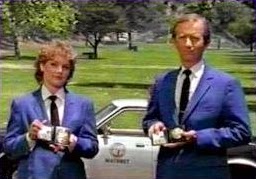 Mathnet is on the case.

What got you into filmmaking in the first place?
Wrestling. We made sure to put a wrestler in everyone of our movies. I had a camera when I was eleven years old, I liked wrestling, and we would videotape ourselves wrestling. We even made storylines. And then we started doing little sketches that had nothing to do with wrestling, and went from there. 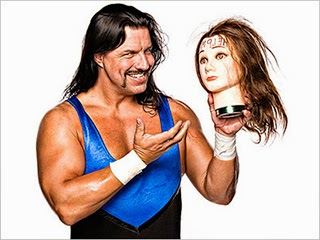 This guy put Al Snow in what has to be one of the best
high concept movies I've ever heard of.
Own it here.
What was your favorite moment in this process?
Just seeing it all come together. Documentary isn’t scripted, it’s a series of educated guesses. You see all these people and see it all coming together, and see this is working. When I was editing it, to watch the movie present itself was fun. 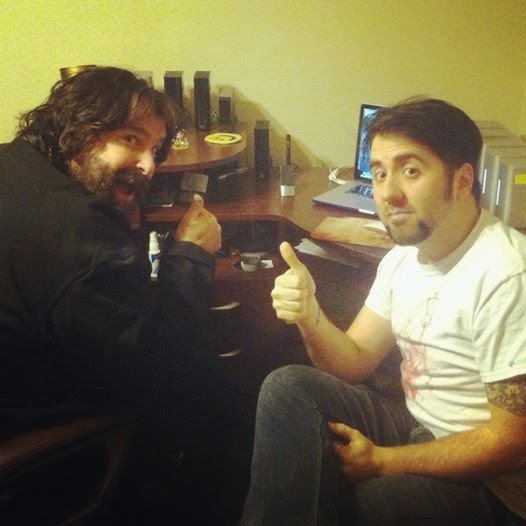 It's even more fun with the Hardcore Legend helping.
What was your most challenging moment during the making of I Am Santa Claus?
Leaving a lot. My first year of marriage, flying every weekend or driving. We were in 19 different states with these Santas. Maybe not every other weekend, but I was traveling a lot. It’s tough. On one hand, you want to go and do this. On the other you don’t want to leave. 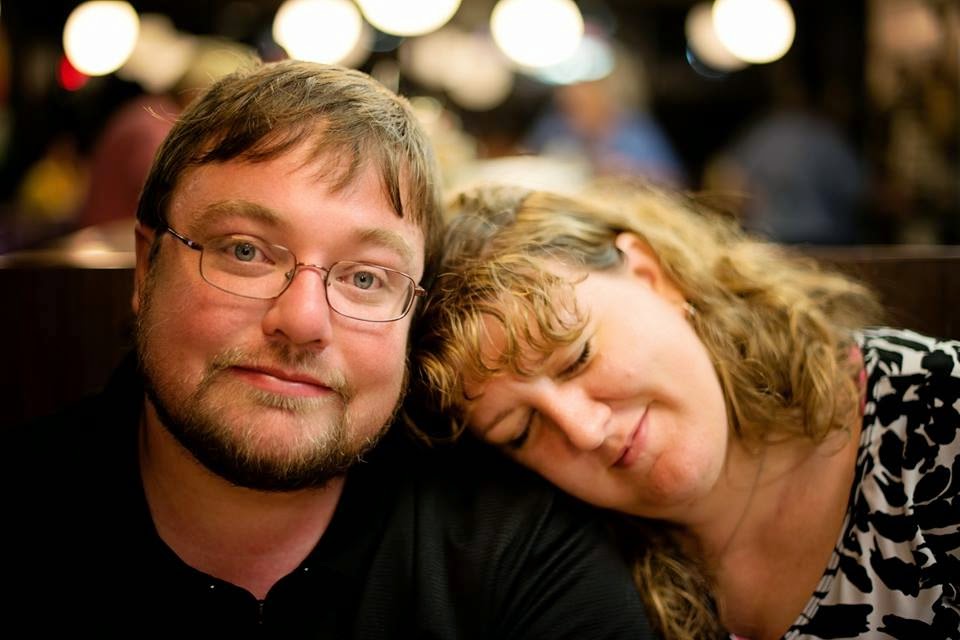 You went through the Kickstarter process twice, first to get your project off the ground (Your Kick STARTER) and then to get finishing funds (Your Kick FINISH). What tips can you give us on navigating Kickstarter, and did it get easier the second time around?

You have to have a plan and realize it’s a full time job. Our first kickstarter we knew was going to be to friends and family. It was very driven toward people who would know me or identify with me. We got 13k for that. The second one we got Mick Foley and he was so helpful and gave so many rewards. It’s tough when no one knows who you are to get money. Even with Mick you couldn’t sit back and rake it in. 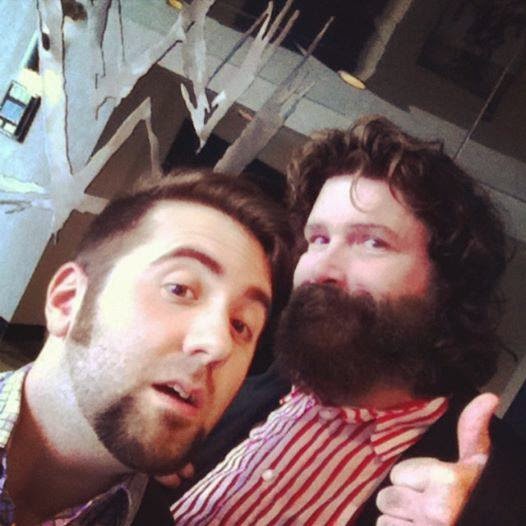 You think I can just put some doepy video and rake in the money, and you can’t do that. Not everyone is Reading Rainbow. 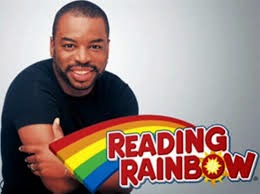 If you feel the need to spontaneously give your money.
It's OK. It's completely normal.
But don't take my word for it.
How did you end up connecting with Mick Foley? Was he on your original list of Santa’s?
Memory’s a son of a bitch. I can remember how it happened but can’t remember when. We put a wrestler in every single one of our movies. I was drivng to New York to film one of our Santa’s, and my buddy said “You know, Mick’s a huge Christmas fan.” We reached out to Tommy Dreamer who set this up. I talked to Mick and he was all about it. First time I met Mick he was in Poconos and he was just starting his stand-up. I talked to him and he was cool, and he seemed to like the idea. It was when he got to take classes and bleached his beard that we began to really become close. Mick started coming to my house and help me edit. He really got his hands in the dirt. He just really likes Santa Claus now. It’s probably my fault and he’ll blame me for it. He’s got his Master’s Degree in Santaclausology 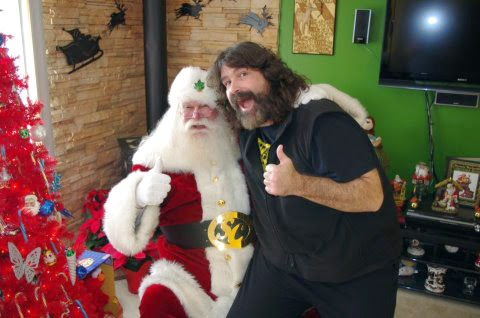 With a minor in AWESOME!

Looking back, what would you do differently with this documentary? Do you have any lessons for future filmmakers?

I don’t think I’d do anything differently. The lessons, if you feel you have an idea and want to do it, then do it. You want to have a budget in line and people behind you to make the movie, but you don’t need that. We were told, if you feel this movie needs to be made then make it. We found a way. 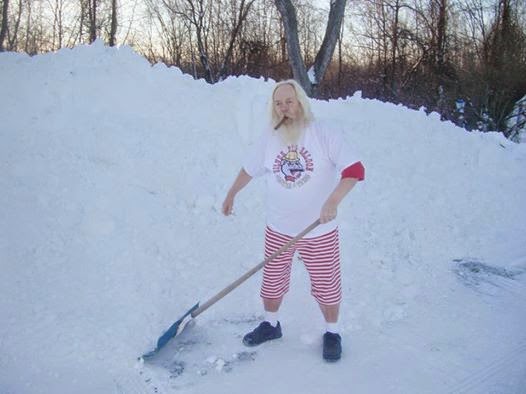 When can eager Santa fans expect to see this film? Any specific festivals we should keep an eye on?
The movie is due out before the Christmas season. Visit  www.iamsantaclausmovie.com for more information.
HOLLY JOLLY LIGHTNING ROUND
Cookies or Candy Canes
Cookies
Elves or Reindeer
Elves? Can I say neither?
Beach or Mountains
Beaches
Sleigh ride or snuggled up by a fire
I don’t like the word snuggled. I’ll do the snuggle one but I don’t feel comfortable with the word snuggled.
Football or Hockey
Wrestling!
Bing Crosby or Elvis Presley
Elvis
Rudolph the Red Nosed Reindeer or A Charlie Brown Christmas
The Reindeer
And finally, what’s your Christmas wish?
For everyone to go see I Am Santa Claus.
I Am Santa Claus has a Facebook and Twitter. Make sure you check out all the Santa goodness. And speaking of Santa's, if you like murder mysteries involving Santa well.... 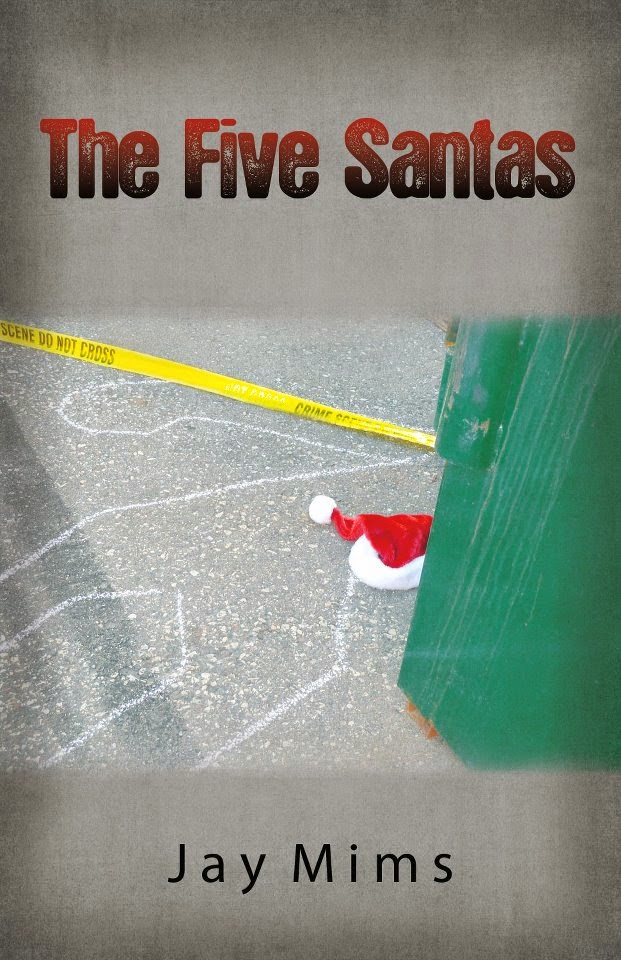 You can find it on Amazon, Barnes and Noble, and Smashwords.

And don't forget, we're celebrating the 12 Days of Mimsey!

Jay Mims writes books, blogs, and recently wrote about what made Disney Princess' tick. Jay lives with The Mimsus, a semi-adopted cat named Eartha Kitty, a lizard named Bob and a passive-aggressive Dalek named Steve. Jay is far funnier on Facebook then in real life. He is terrible at Twitter.  Jay now has a website.